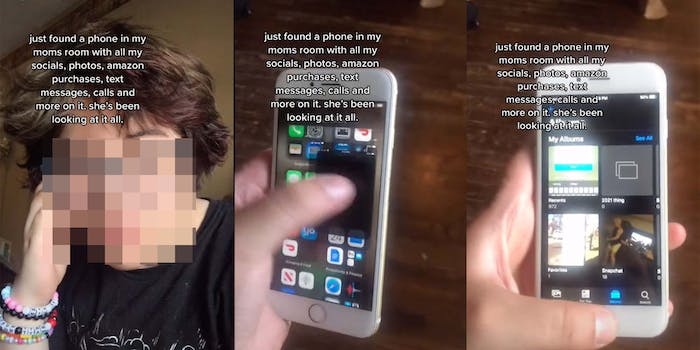 TikTok teen says he found mom’s secret phone that has access to all his texts, photos, social media

'I'm really upset over this, actually.'

In a now-viral TikTok video posted on July 24, a teenager says he found an iPhone in his mother’s room that has access to all his social media accounts, photos, online purchases, texts, call history, and more.

“I’m really upset over this, actually,” wrote the 16-year-old TikToker (@fagforbuckybarnes) in the video’s caption. “I literally have nothing to hide and have never done anything to lose her trust, yet she does this.”

Comments on the video have referred to the mother’s actions as helicopter parenting, also known as parenting that involves behavior some might consider invasive and disrespectful of a child’s boundaries. Apps like mSpy and TeenSafe have the potential to facilitate the type of intense monitoring shown in the TikTok video.

“Why can’t parents understand boundaries???” wrote @vinevenom in a comment on the video.

Other commenters pointed out that the mother in question isn’t only invading the privacy of her son but also those who are communicating with her son via text messages and social media. Some even suggested the teen make a new iCloud account to protect his privacy.

In a Nautilus piece about parents who spy on their children, health and science writer Kirsten Weir says that “privacy and sense of individual space” are paramount to adolescents being able to develop their own identity.

The Daily Dot has reached out to TikTok user @fagforbuckybarnes.