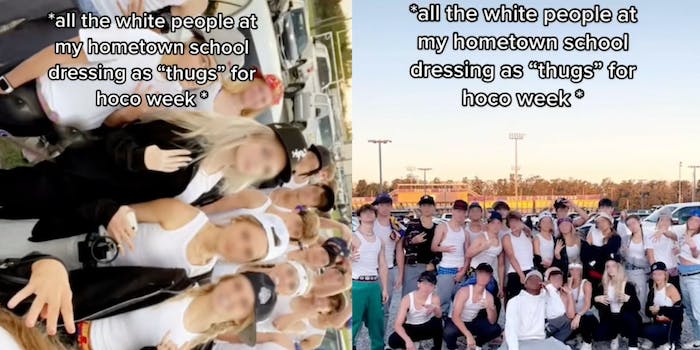 For most schools, homecoming week is all about dressing up for school spirit. But in a TikTok posted on Sept. 23, a group of juniors dressed as “thugs.”

The video posted by @._bells_ shows juniors at Dutchtown High School in Geismar, Louisiana, posing as gang members wearing white tank tops and durags with foil “grills” in their mouths. The TikToker says in the caption that these students had a choice for costumes and wondered why they “couldn’t have like dressed as a tree or something idk.”

According to Dutchtown High School’s social media, that day in spirit week was “DTHS” day. Each grade was given a letter within DTHS and had to dress up as something starting with the letter. Juniors were Ts.

The video caused a lot of contention within the comments section with some people defending the student’s choices.

Others assert that the costumes were racist.

“It’s all the white people saying ‘calm down every school does this’ like I never seen that in LA or anywhere else with POC like make it make sense,” notes @ilove_itachi13.

Even other juniors at Dutchtown commented on the situation.

“I saw them and got embarrassed,” recalls @la.karen.m.

Another student that goes by @kiss.kiss.mollyslips said, “I knew dressing up as tony stark would be a good decision.”

The Daily Dot has reached out to @._bells_ via TikTok and Dutchtown High School via email for comment.