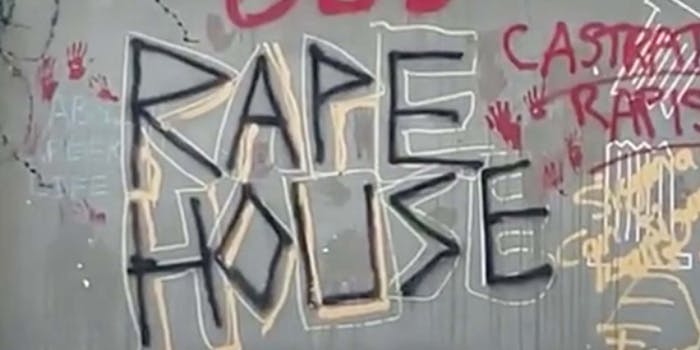 'Frat row has got to go,' protesters shouted.

The University of Southern California suspended the Sigma Nu fraternity after more than six allegations of members spiking drinks and one allegation of sexual assault on Wednesday, according to KABC-TV News.

A TikTok from @thaadollface shows part of the aftermath of the assault: The Sigma Nu fraternity house covered in graffiti and signs with phrases including “rape house” and “castrate rapists” written on the front of the building.

KABC-TV referenced a University of South Department of Public Safety crime log that details the incidents as they were reported.

Also graffitied on the Sigma Nu house is the name of the fraternity’s president, Ryan Schiffilea, who has been listed as a suspect in the case by the Los Angeles Police Department. As of Friday, Schiffilea had not been arrested or charged by LAPD, as reported by the university’s Daily Trojan. The Daily Dot reached out to the Los Angeles Police Department.

Sarah Donchey, a Los Angeles-based reporter for CBS, posted footage of students protesting in front of the Sigma Nu house. The video shows them shouting “frat row has got to go” in unison.

In a statement from the Epsilon Omicron Chapter of Sigma Nu about the incidents and allegations on its website, Director of Communications Christopher Brenton said that the chapter is “deeply concerned by recent reports of allegations of serious wrongdoing.”

“The gentlemen of Sigma Nu stand in absolute solidarity with all victims of sexual abuse (and victims of all abuse) and in no way condone any acts of violence or sexual abuse by anyone- especially members of Sigma Nu Fraternity,” Brenton wrote in the statement. He also stated that the chapter is working with officials at the university to investigate the wrongdoings.

Many TikTok users in the comments of @theedollface’s video expressed solidarity with the survivors of sexual assault and drugging by Sigma Nu members.

“Every frat does this,” commented @lingopingojingo. “Glad somebody finally decided that it’s wrong.”

“A message to Gen Z from a Gen X boomer,” wrote @sjeter99. “Thank you for doing what we should have.”

“Don’t let them forget and keep speaking up,” commented @chaijxn.

The Daily Dot has reached out to @thaadollface, the University of Southern California, and Sigma Nu.