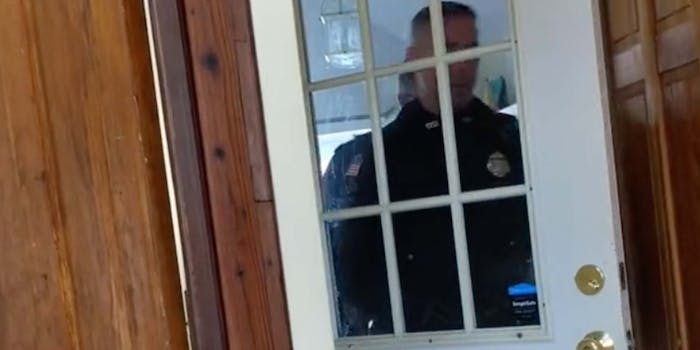 Officers tried to kick down her door and dragged her outside.

In a viral TikTok, police officers try to kick down a door before opening it with a key, allegedly to perform a “wellness check” in Plymouth, Massachusetts. A wellness check, also called a “welfare check,” is when police check on someone who may be in danger and unexpectedly hasn’t been in touch with their family or friends for some time.

Once the officers are inside the home, they take Mari Helena (user @afraid0fthedark) by the arms. She doesn’t walk and is dragged outside by the officers. They ask her to stand up and address her by her name.

“Just walk young lady,” an officer says to Mari. “It’ll be a lot simpler for ya.”

The video ends with the sound of her shoes dragging on the pavement and someone telling her that she’s “OK.”

In the comments of the TikTok, Mari, who posted the video on Nov. 23, said that the police were called because the group home in which she lives was worried when she didn’t answer her phone.

“They forgot my phones off and panicked,” Mari wrote.

Between Nov. 23 and Dec. 2, Mari posted more than 15 follow-up videos adding context to the incident.

In a TikTok that seems to have been filmed just before the viral video, Mari tells police through a closed door that she will not talk to them.

“What do you want?” she says to the officer standing on the other side of the door. “I don’t want to fucking talk to you.”

Mari said that when police arrived, a housekeeper outside the house “refused to give them the key,” which is why they attempted to kick down the door. The TikToker also said that officers kicked down the door knowing that the owner of the house (her friend’s mom) was on the way.

“They never knocked,” Mari says in another TikTok.

Mari says she’s “a survivor of sexual abuse” and that “men frighten” her. She also posted a TikTok of another experience she had with police officers in which she was “held at gunpoint.”

According to the TikToker, her friend’s mom and EMTs arrived at the house “way later” after the police took her out of the house.

Mari says she is 18-years-old, and that she “checked herself in to DCF (Department of Children and Families) custody” because she is housing insecure.

“It’s still hard for me to even believe what happened to me,” Mari said of her interaction with the police in the viral video. She also said she posted the video to “get people to realize” that “calling the police is not what you do in these situations.”

“Same think happened to us in [New Hampshire],” wrote user @vanessapopovich. “They broke our door down knowing we were fine.”

“They did this to my door and threw some personal belonging outside and it got stolen,” @ilovelucy30 commented.

Others criticized Mari for the way she responded to police and stressed the importance of wellness checks.

“Answering the door and confirming you were ok would have avoided that and deescalated the situation,” @taliiaaxo commented. “It didn’t have to get there.”

But some sympathized with Mari.

“Nothing says help like giving someone PTSD,” wrote @shogunvader_.

The Daily Dot has reached out to Mari and the Plymouth Police Department.