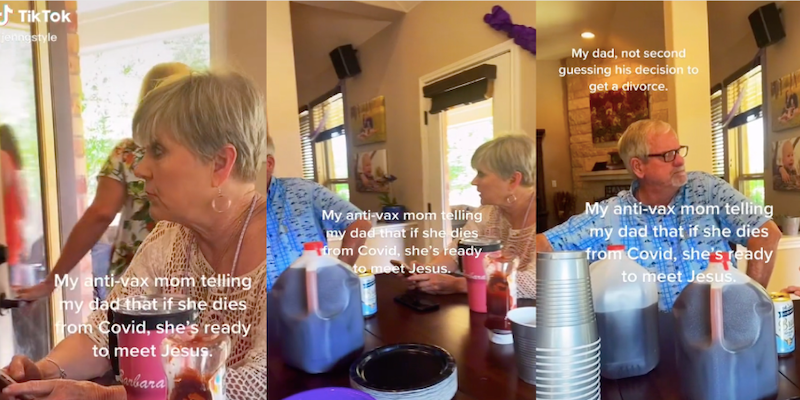 The mother apparently said she was 'ready to meet Jesus.'

A TikToker filmed her parents at a family gathering, where her anti-vaxxer mom said she’s “ready to meet Jesus.”

In the short, 10-second clip, the TikToker filmed her mom talking with her dad as the text on-screen reads, “my anti-vax mom telling my dad that if she dies from COVID, she’s ready to meet Jesus.” The camera then pans over to her father who doesn’t say anything but added text to the screen that says, “my dad, not second-guessing his decision to get a divorce.”

The video was posted to TikTok on Saturday and has since gained over 436,000 views and has gained over 29,000 likes.

Most of the over 3,000 comments on the video were sympathetic to the TikToker because they’ve had similar experiences with their family members.

“I just told my mother-in-law that she won’t be able to see our [baby] until she’s vaxxed… it was a fun convo,” a commenter wrote. Another person commented saying she told her anti-vax parents to make living wills and make her anti-vax sister the power of attorney because she wouldn’t be able to make end-of-life decisions.

One person is conscious of the fact that hospitals across the country are filling up with unvaccinated people, who account for 99.2 percent of those hospitalized with COVID. “Don’t bother taking her to the hospital since she’s ready. It’s her choice!!” they wrote.

There were a few comments that came to the mom’s defense, with one saying “People need to let people make their own decisions and stop judging.” The creator further explained that she is letting her make her decision, she just finds it “crazy.” She continued to write, “She’s the only person in my family not vaccinated and she has diabetes and COPD.”

The Daily Dot reached out to the TikTok creator for comment about the video but did not immediately hear back.