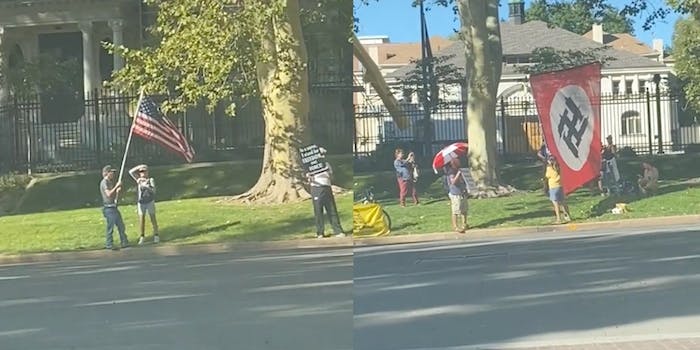 A TikToker shared a now-viral video that shows her neighbors hoisting a Nazi flag to protest COVID-19 vaccines.

TikToker @imnotcryingshutup, who goes by Kelley Mills, shared the video with her followers on Sunday. By Monday, it had been viewed more than 70,000 times.

The video shows her spotting a red flag bearing a swastika on the street alongside a few people who were also hoisting an American flag and some posters.

“This is not happening in my neighborhood,” Mills says from inside the car. According to her bio, Mills is located in Utah, and multiple Instagram accounts said the protest took place in Salt Lake City. Only a little over 50% of the state is fully vaccinated.

Mills gets out of her vehicle and walks towards the group. As she approaches them, another man is heard yelling at the group surrounding the offensive flag.

“Yeah I do have a problem with it—why is it a Nazi flag?” he says.

In response, one of the protesters tries to draw comparisons between the COVID-19 vaccine and how Nazis forced Jews with “what to eat, what to drink, what to smoke.”

Another man among the group of protesters says that comparison “sounds reasonable.”

“Do you consider yourself pro-life though?” Mills asks him. “I like living,” he responds.

Mills points out that saying he is pro-life while being opposed to the vaccine is a conflict, given that the latter is meant to save lives.

“No, that’s what big pharma has taught us,” he says. He also dismisses the polio vaccine and says the only reason people don’t get cholera anymore is that people stopped defecating in public, not because of the vaccine.

According to the Center for Disease Control, polio has been eradicated in the country owing to an efficient vaccine program; cholera was eradicated only in part through an improvement in the water and sewage systems.

When asked if he went to medical school or if he studied science, the man said, “I try to educate myself.” He added that he would not go to a “big pharma medical school.” He then refers Mills to YouTube to do more research and asks her to “be more honest with yourself.”

Mills immediately laughs off the man’s advice. “I’m not gonna go do research on YouTube for something that is so out of your realm of knowledge,” she says.

Shortly after, the video cuts to a different conversation where Mills asks the protester if he understands why hoisting the Nazi flag is offensive.

“Free speech doesn’t have to be appeasing,” he responds.

He then says he and his team were “of course” trying to be provocative intentionally.

Many commented on Mills’ video condemning not just the anti-vaccine messaging but also the use of the Nazi flag.

“Flying that flag should be reported and is considered a possible hate crime,” wrote one user.

“That’s literally a hate symbol,” another person wrote in reference to the man using “free speech” as an excuse to put up the flag.

The Daily Dot reached out to Mills via TikTok message.