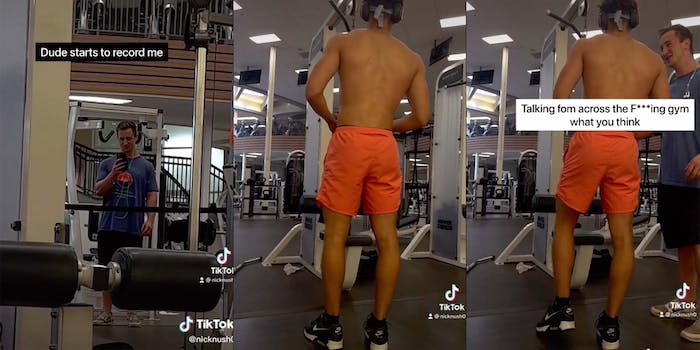 ‘This is toxic masculinity in action’: Male Karen hurls slurs at TikToker working out shirtless

'The self control bro.'

In a TikTok posted on Tuesday, fitness TikToker Nick Nush (@nicknush0) is called ableist and homophobic slurs by a man apparently angered that Nush was working out shirtless. The man also records Nush while he is working out.

“You’re shirtless in the fucking gym, [R-word],” the man says to Nush, who explains that he is trying to take a video of his back.

The man eventually walks up to Nush and stands close to him and says “fuck you” multiple times.

“I don’t even know this dude and I’m confused as hell what’s going on,” Nush says in a voiceover in the TikTok. “He continues to stare at me, flip me off, and mouth things at me.”

Nush told the Daily Dot in an Instagram direct message that the entirety of his interaction with the man was shown in the video and that he was shocked that the man would record him and speak to him with hostility.

“I didn’t know what to do because I’ve never thought someone would act like this in the gym,” Nush told the Daily Dot.

Many in the comments applauded Nush for his composure.

“The self control bro,” wrote @haydenbriers.

“For everyone saying why I didn’t hit him I know he was being a tool and an asshole,” Nush said in the comments section of the video. “But these people aren’t worth it. I’m more mature than this guy.”

Others pointed out that Nush’s experience is similar to that of female-bodied people at the gym.

“This is toxic masculinity in action,” @daviesrme commented. “You just experienced a tenth of what most women have to endure in the weights section every day.”