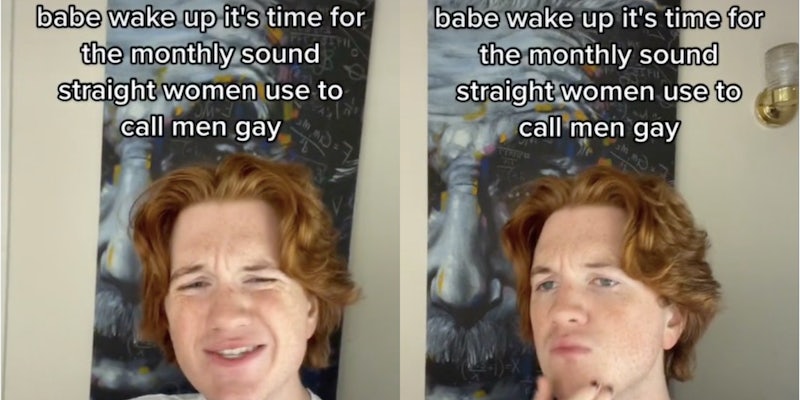 TikToker calls out those ‘fruity’ audios for their veiled homophobia

The audio is the latest TikTok sound that categorizes different behaviors displayed by men as feminine or gay.

A TikToker called out viral audios—many of which contain the derogatory term “fruity”—for their thinly veiled homophobia.

In a TikTok posted on September 13, Owen (@cal_owen) lip sync’s an audio that says “mmm, this one has a little sweetness to it,” with the overlay text “it’s time for the monthly sound straight women use to call men gay.”

The audio is from KeKe Palmer’s appearance on Hot Ones (Palmer was referring to a chicken wing) and has been used in over 5,000 videos. Many of the videos denote “feminine” behavior in men, like using the abbreviation “tf” (“the fuck”), texting with emojis, or texting in all lowercase letters.

The audio is the latest iteration of a viral TikTok sound that categorizes different behaviors displayed by men as feminine or gay. In August, queer TikTokers called out videos using an audio that says “how can I be homophobic, my bitch is gay” to say men were “gay” for wearing tight pants or hanging out with male friends, among other things.

Another audio, “this is definitely fruity,” which has been used in almost 17,000 videos, has also been used to label “gay” behaviors.

In the caption of his video about the aforementioned audios being used in homophobic ways, Owen wrote that “fruity was a slippery slope,” referring to the jokes about men’s behavior being labeled as “fruity,” which is a derogatory term for gay men, particularly those who are effeminate.

In an interview with the Daily Dot, Owen said that he doesn’t think that the people using audios to call out when men “don’t perform according to gender norms” realize that they are being homophobic and contributing to gendered stereotypes.

“In their mind, being gay is fine,” Owen said, referencing the immense social progress the LGBTQ+ community has made in the last few decades. “[So] they think it’s ok to call men ‘gay’ whenever men don’t perform according to gender norms.”

But just because being gay is now more widely accepted, that doesn’t mean that straight women (as referenced in Owen’s TikTok) ascribing specific behaviors to homosexuality is without fault.

“It punishes men from stepping outside of gender roles that are inherently harmful for both men and women,” Owen told the Daily Dot. “It perpetuates a broken system.”

Of course, TikTok’s ability to meme-ify audios by allowing users to place sounds in unexpected contexts is what contributes to the app’s hilarity and popularity—but Owen said there’s a dark side to that, too.