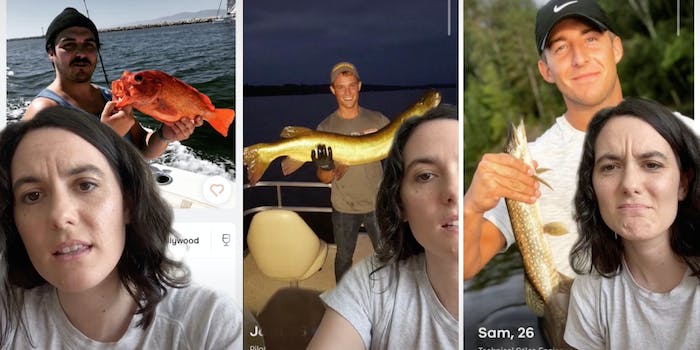 'Fish photos are photos you take to share with other guys.'

Cala Murry grew up fishing with her dad. In the mountains of northern California, they mostly caught trout.

She understands the appeal of fishing itself. What she doesn’t understand are fish boys.

Fish boys, or often stylized “#fishboys,” are men who take photos of themselves holding a fish they’ve caught, and then add the photos to their dating profiles. Fish boys somehow all share this universal experience, which is taking a photo with a fish in any which way of prideful poses, and using these photos to court and reel in potential dates.

Murry, who lives in Los Angeles, said it’s particularly confusing to see fish boys while using Tinder in the city.

Since downloading TikTok in April, she has almost exclusively posted videos wherein she rates fish in men’s Tinder profiles. Using a setting to alter her voice and TikTok’s green-screen effect, Murry appears in front of screenshots of the profiles and critiques the fish.

“The problem we have here is that the fish is a very weird shape,” she says in one video.

Dozens of others have posted their own renditions using the hashtag #fishboys.

The strange-looking fish that fishboys show off

Murry has been on dating apps since she was 22 and said she doesn’t exactly remember when she first noticed the trend of fish boys. Now, at 29, she’s still interested in why men choose to “pose with a dead thing.”

“Fish photos are photos you take to share with other guys,” Murry said. “So the fact that you would be putting it on your profile, to like appeal to straight women, is really funny to me.”

Her least favorite fish—long, slender, and green—is the first fish featured in her first video.

“I’ve truly never seen a fish that is that shape, it really scares me. I don’t like how bendy [it is],” Murry told the Daily Dot, adding that commenters debated what kind of fish it was. “I have Googled it and only become more horrified by the fact that it exists.”

These days, other people send her their screenshots of fish boy profiles to use in the videos. She said she often gets photos of bloody fish, which are too gross for her to show.

“That’s just another level of unappealing,” Murry said. “Why on earth would you ever post [that] on a dating profile; there’s blood everywhere.”

Keeping the personal critiques at bay

Murry told the Daily Dot that she’s never reached out to any of the men she’s used in her videos—or any fish boys in general. Murry said she focuses on critiquing the fish, not the person, in hopes that if any of the featured fish boys saw video, they would just think it was funny.

“I have had people commenting ‘have you asked permission for these photos,’ which I think is interesting,” Murry said. “It’s something I have definitely thought about and have felt uncomfortable about, which is why I try not to critique anyone based on their appearance. I don’t want the videos to be mean-spirited at all.”

A common defense, Murry said, is that those may be the only photos the men have of themselves. But in her experience viewing profiles, fish boys always have more than just the one photo with the fish.

“I’ve had other people comment that they’re subconsciously showing you that they can provide for you,” Murry said. “You know, showing off.”

Critiquing the fish comes naturally to Murry, she said, and it doesn’t really have anything to do with her fishing background. Mostly, she just calls them gross. But the irreverence speaks to other women.

“I was totally floored at first,” Murry said. “Then, it made sense to me that like, of course so many women can relate to that content. I pretty much knew right away when it started taking off that I would make more of them because I had more photos and I had more to say.”

At one point, Murry came across a video that used some of her same jokes. The clip went viral on TikTok, Instagram, Twitter. Since then, @Rachellloooo has posted several variations of the video and credited Murry for starting the trend in at least one.

Murry said @Rachellloooo reached out to Murry to apologize. Murry said it’s upsetting to see the other video continue to gain attention but that it’s not the worst kind of plagiarism that exists on the app.

“There’s a far more insidious type of plagiarism and that’s white girls plagiarizing the choreography of Black creators on TikTok. It seems like that is pretty common,” Murry said. “I think overall, there should probably be a way for more accountability on the app. I don’t know what that looks like, but I’d like to see that for everyone’s sake.”

For now, Murry said she’ll continue to make fish related content on TikTok as long as the app is available in the U.S. In the future, she hopes to do more creative things with the topic, like the fish song she posted on July 4.

“Women, this gives us a chance to unite to come together and commiserate on other dating app experiences,” Murry told the Daily Dot. “It’s healing.”