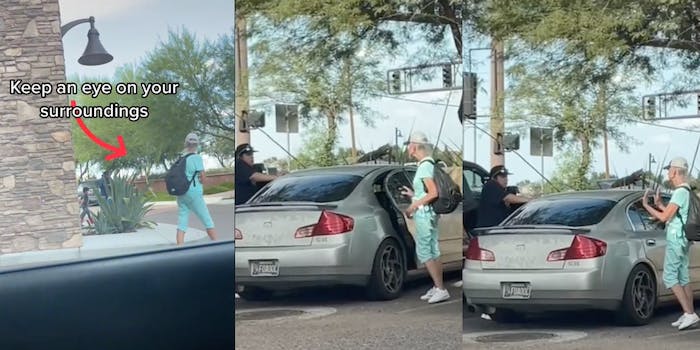 Some people think it may have been a mental health issue.

A TikToker caught a woman on video trying to open people’s car doors as they got into their vehicles themselves.

The caption reads: “If you live in Arizona watch out for this old lady. We faced her later & she was creepy.” The TikTok currently has 18 million views.

In the TikTok, posted by @thenotoriousthree, the woman watches a man and what appears to be his child walk toward their car in a parking lot. The older woman slowly walks behind them and waits for them to open their car doors and get inside. She then approaches the vehicle and opens the back door and looks inside.

There is no audio on the video detailing the conversation, but the owner of the vehicle looks across the hood of the car and stares at the woman, who shuts the door and puts her hands up. The video cuts out right as she turns away.

One commenter asked why the TikToker just stood by while the lady did this. She made a response video in which she explains that she thought the woman may have been asking for money or doing something else.

She says the woman also tried to get into her car but thought she may have not known she was in it since her windows were tinted. She then walked away and did it to the family in the first TikTok.

When she stopped recording the TikTok, she says her boyfriend went up to the woman and told her to stop doing that since people in that area often carry weapons in their cars. At that point, she says the woman “creepily” smiled and laughed and “disappeared into the bushes.”

She also says she assumed the woman might have been homeless and was looking to take things from cars.

Many people in the comments called the TikToker out for doing nothing, saying if the woman opened her door she would clearly do it to someone else. They also criticized her for not doing anything especially since a child was involved.

“Still could’ve honked like come on lady…. You sense the danger and you just record….” said @crod1796.

“There was a kid…. You should have yelled….” wrote @saguaro_sugar.

“So pretty much you let her get away and do nothing about it okay,” commented @galaxyiei.

Others stood up for the TikToker.

“Okay for everyone that’s getting on her for not getting out and not doing nothing, y’all forgot that these people may be targeting ANYONE and also could be carrying a deadly weapon besides a gun! At least they confronted the old lady! TF!” said @lkafualo.

“A lot of time ppl won’t do the same thing twice in the same place. It’s idiotic. That’s why she recorded cause she didn’t know if it was gonna happen,” wrote @venomlegion.

Some thought the “creepy” woman may have been suffering from a mental condition.

“Why not pray for that woman, apparently she’s lost or maybe she’s in crisis, you just never know someone’s situation,” said @azcaliente602.

Another commenter said a family member of hers has dealt with the woman personally:

“My aunt fought with her yesterday because she [thought] my younger baby cousin was her son and my other baby cousin, his sister, was ready to fight,” wrote @helenavargas61.

“Someone else said they know her and she has stage 2 dementia or something,” the creator replied.

Most people were simply concerned about the situation at hand.

“I’m sorry old people are not exempt from these hands ,” said @phoenixjade94.

“Thank you for recording, sometimes it’s all you can do when you don’t know what’s happening,” commented @missfreudianslit.

The Daily Dot reached out to the TikToker via comment section.