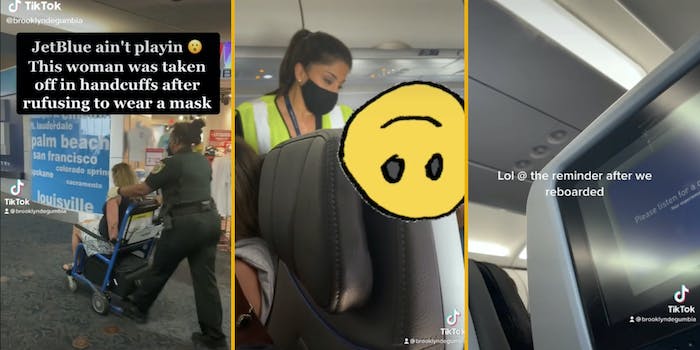 ‘You’re gonna have to get off the plane’: TikToker says woman on JetBlue flight caused 3-hour delay (updated)

The woman was later arrested for trespassing after refusing to deplane.

Update 1:44pm CT Sept. 8: A JetBlue representative told the Daily Dot that the woman wheeled off the flight had been “going in and out of consciousness” shortly before boarding the aircraft. An offense report from the Palm Beach County Sheriff’s Department obtained by the Daily Dot states that the passenger was sick, stumbling, sweating, and “couldn’t form a sentence” after boarding. When flight attendants tried to give her water, a cold compress, and wet towels, the passenger refused and called the assistance “ridiculous.”

Boarding was temporarily halted until the lead gate agent deemed the passenger OK to fly. After the plane began pulling out of the gate, the woman appeared unwell again, and the pilot returned to the gate. The woman was told to deplane, but refused, causing the rest of the passengers deplane as a result. She was later arrested for trespassing after refusing to get off the plane multiple times, according to the report.

Neither JetBlue nor the Palm Beach County Sheriff cited masks as a factor for the woman’s arrest.

A TikToker posted a viral video that asserts “JetBlue ain’t playin’,” claiming a flight she was on was delayed three hours because a woman refused to wear a mask on a plane, causing her to be arrested and wheeled off the plane.

The video comes from TikToker @brooklyndegumbia, and has found more than half a million views since going up on the platform in late August. In a text interview with the Daily Dot, the TikToker confirmed that it was an Aug. 24 flight from Palm Beach, Florida to Hartford, Connecticut.

Brooklyn DeGumbia, who was until recently with Tulsa TV station Fox23, documented scenes from the JetBlue flight she was on. The video started with a title card that noted, “This woman was taken off in handcuffs after rufusing (sic) to wear a mask.”

She went on to show scenes from the plane, in which she says the woman refused to wear the mask despite two flight attendants and a police officer crowding the plane aisle to appeal to her. The woman’s face is obscured by a sticker, making it unclear whether she had been wearing a mask. At one point, the woman says, “My daughter’s going to college” repeatedly, which appeared to be the sum of her case for staying on the plane.

She also emphasized, as the other passengers had to deplane, “No, no, no, listen to me.”

Many of the commenters lauded JetBlue’s actions, with one saying, “This is exactly what should happen, EVERY time, without delay—on every airline.”

Another asked, “Why do they wait until they are on the plane to throw their tantrum? They signed up for this when buying the ticket?”

There was some controversy raised, however, by one commenter who noted some incongruity in the details. The TikToker chose to cover the anti-masker’s face with a upside-down smiling face emoji throughout the exchange, but the camera captures the passenger next to the creator capturing the exchange via smartphone video.

That commenter said, “Bro … look in the other person’s camera recording her. She has a blue disposable mask on. Y’all really chasing clout.”

That led to a brief back-and-forth with another commenter as to whether that video captured the alleged anti-masker or the passenger next to her.

DeGumbia had an explanation, though: “When she sat her down, she had her mask down, and when the flight attendant asked her to pull it up, she said she can’t wear it cause she’s nervous and this is her first time flying alone.”

She went on to relay that the flight attendant said, in a polite tone, “If you can’t wear your mask, you’re gonna have to get off the plane and we’ll find another solution.” The passenger agreed to that, but then took her mask down five minutes later, claiming she was going through menopause.

The TikToker also clarified the mask situation in a follow up video, saying the woman would pull her mask up when the flight attendant approached her and pull it back down when she walked away.

DeGumbia reports that the whole episode, which went about 90 minutes from when the flight attendant first engaged the passenger to making the other passengers get off the plane, also included medics coming on to the plane to check on her, and her refusing to get off the plane when the flight attendant requested for her to do so. That led to the opening scene in her video, in which an officer from the Palm Beach County Sheriff’s Office escorts the woman off the plane.