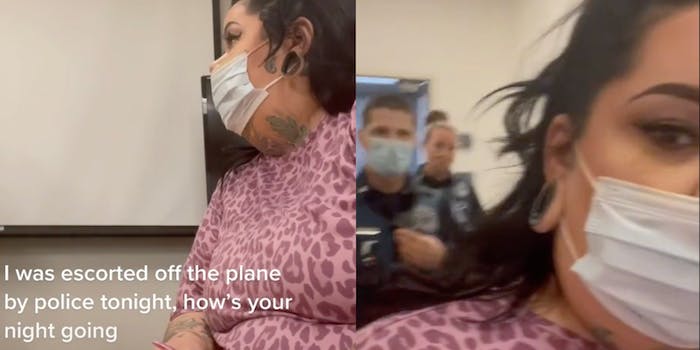 ‘I’m being harassed’: TikToker says she was kicked off Alaska Airlines flight for wearing crop top

The airline previously came under fire for slut shaming another passenger.

In a TikTok posted on September 4, TikToker @fattrophywife posted a video showing police escorting her off an Alaska Airlines flight and then interrogating her about her outfit. @fattrophywife tells police that she was kicked off her flight because of what she was wearing.

“I’m being harassed and now I’m being detained,” she says to an officer. “I wore an outfit. That’s what happened.”

@fattrophywife explains that she was wearing a crop top on the flight when a flight attendant asked her to put another shirt on. She did.

“And then they approached me again, saying I can’t wear this, my stomach is showing, and it’s inappropriate,” says @fattrophywife.

After the flight attendant continued to reprimand @fattrophywife for her outfit, the TikToker said, “If you’re going to kick me off, kick me off.” That’s when police were called.

The officers in the video confirm that @fattrophywife didn’t commit any crimes.

In a follow up video, she shows her outfit. @fattrophywife is wearing a long-sleeved shirt and shorts.

@fattrophywife’s experience is not an isolated one. On July 31, TikToker @sierrasteadman posted a video saying she was kicked off an Alaska Airlines flight and was “slut-shame[d]” in front of the entire plane.

In a follow up video, she showed her outfit: a sports bra, shorts, and a sweatshirt. Alaska Airlines apologized to @sierrasteadman, and called her experience a customer service failure on their part.

“This should not be happening numerous amounts of times,” said @sierrasteadman in a TikTok addressing @fattrophywife’s experience on Alaska Airlines. “It should not even be happening once.”

@fattrophywife and Alaska Airlines did not immediately respond to the Daily Dot’s request for comment via email. The Daily Dot has reached out to @sierrasteadman via Instagram direct message.