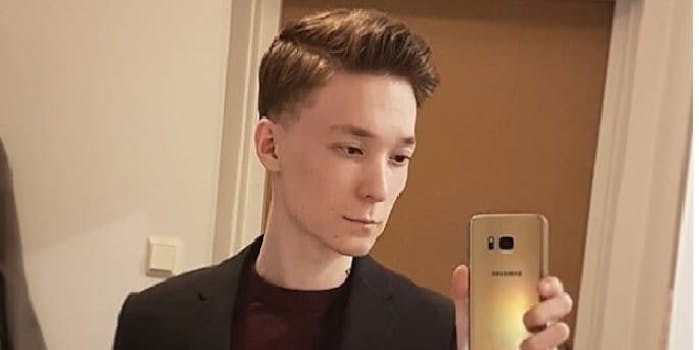 TheRealKenzo made his comments to a transgender woman.

TheRealKenzo, a popular gaming YouTuber with nearly 450,000 subscribers, is facing the internet’s heat for transphobic comments he made last year. Even though Kenzo has apologized and said he’s trying to become a better person, one of his gaming partnerships has ended because of the controversy.

As noted by Dexerto, Kenzo made his comments to EeveeA during chats on Discord in 2018. EeveeA is an Overwatch player who identifies as a transgender woman.

In chats released Thursday by a Twitter user named @LonelyKarma2405, Kenzo misgendered EeveeA in May 2018, writing, “eevee is triggered as f, he says he’s a ‘she’ but he can’t take female jokes, so he got a @Dustey banned on twitter.”

In August 2018, Kenzo went on write, “I don’t believe that lesbians or bi exist, it’s all a conspiracy from the illuminati.” He also wrote, ““How come we never see transgender people being lesbian? Like a man transgendering to a woman, then still like women. That’s why I don’t believe in the whole ‘Put in the wrong body’ type of thing, since there’s no people that’s put in the wrong body but still like the opposite sex.”

At one point, somebody on Discord told him, “We are getting [you a] bad reputation now.”

Kenzo replied by writing, “I don’t care about these extreme feminists, just watching because my friend is playing in one of the teams.”

On Thursday, SoaR Gaming announced it would no longer work with Kenzo, writing on Twitter, “Due to recent events, we have decided to release [Kenzo] from SoaR.”

Due to recent events, we have decided to release @TheFakeKenzo from SoaR.

Kenzo responded to all of this on Twitter by saying he regretted his words. He wrote, “About a year ago I acted and thought in ways that’s not okay and I regret being like that. I talked to EeveeA and I have a wider knowledge of what I did wrong. I can’t take back what I said, but I can change of who I am today and improve. And I hope people will give me time.” He also wrote he was “grateful for Eeveea being mature and calm about this.”

The two apparently had a six-hour conversation to work out their differences.

For her part, Eeveea wrote, “He has directly apologized to me, he understands what he needs to work on and we both understand change like this doesn’t happen overnight. He has a ways to go, for sure. … He talked with me that long about these topics and he does have a much better perspective on what he was wrong about, he acknowledges that he can’t just make the things he said go away, but that he wants to improve regardless.”