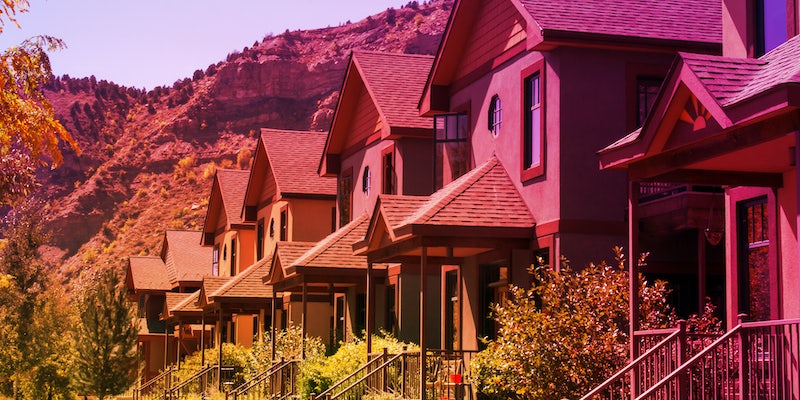 ‘It’s getting really old’: Locals band together on Instagram to fight a tourist-fueled housing crisis

The fight to ‘legalize locals.'

Telluride, Colorado, is hidden in the San Juan Mountains, providing opportunities for outdoor exploration and a dramatic background of craggy mountaintops that make the ski town a vacation destination and a beloved second or third home for those who can afford real estate there.

But like many other idyllic towns in the U.S., Telluride is facing an affordable housing crisis. And longtime residents and newcomers are searching for housing in what feels like musical chairs with real-life stakes.

Throughout 2020 and 2021, second homeowners made Telluride their primary residence and remote workers fled from cities in search of a more peaceful place to quarantine. The sudden influx of visitors, grouped with ongoing housing-related staffing issues and the added pressures of COVID-19, meant that Telluride’s businesses and workers felt the severity of the housing crisis more acutely.

Tellurneighbor, an Instagram page that was started in 2019 to support a citizens’ initiative ballot measure addressing the crisis, stepped up to advocate for those most affected. The team behind the page was back with another citizens’ initiative, and this time, they garnered a large following.

But as the activists behind Tellurneighbor would soon learn, joining a conversation about affordable housing meant facing opposition in their community.

The isolating search for housing

While the affordable housing crisis and accompanying staffing shortage are not unique to Telluride, its implications are exacerbated by the conditions of the small mountain town. Namely, Telluride is incredibly isolated—separated by over 60 miles of winding mountain road from the nearest small city and hemmed in by a box canyon that leaves little room for expansion.

“I’ve been out of housing since June,” says Bonnie Webber, a property manager in Telluride. “Luckily, my boss is letting me stay at their place when they’re out of town and when they are [here], I go out of town to visit friends and family. It’s getting really old.”

This is a sentiment shared by Zack Freeburg and Jenny Tucker, who both work as servers in one of Telluride’s upscale eateries. The couple has lived in four different apartments in their three years in town. They were lucky enough to find the fourth place just before they had planned to pick up and leave after months spent searching in vain for a new home.

“It was nerve-wracking,” Freeburg tells the Daily Dot.

“Very nerve-wracking,” Tucker agrees. “We prepared a little bit but it was still scary because we didn’t have a place to go to.”

The tidal wave of COVID-19 tourism

According to a  2019 report written before the COVID-19 pandemic worsened Telluride’s housing crisis, 59% of employers in town rated the lack of housing for their staff as a serious or critical problem for their business. The report showed that the average residential sale price was $1.5 million, meaning that locals who work in town (where the average income is $77,000 a year) could rarely afford to buy property.

Meanwhile, properties for rent are never available for long, and even on Craigslist, studio apartments often start at around $1,500 a month. To pay less than that, residents must apply for Telluride’s existing affordable housing units and join waiting lists several years long.

The affordable housing crisis in Telluride became even more pronounced during the pandemic as Telluride saw a 9% increase in tourism. As a result, Telluride’s businesses were flooded with guests at a rate they had never before seen; there were lines out the door of every restaurant in town most nights.

All of this while workers were still grappling with fast-changing COVID-19 restrictions and staffing shortages.

By the end of 2021, two beloved town institutions—Ghost Town Coffee and Gnar Tacos—had shuttered due to a lack of staff in the face of overwhelming business, and many restaurants were forced to keep limited hours without enough employees to handle the crowds.

A virtual space for locals

For a while, it seemed as if the whole town of Telluride would crumble under the weight of changes that the pandemic conditions had sparked, and tensions surrounding the affordable housing discussion heightened. Two years after their first successful citizens’ initiative, which raised the tax on short-term rentals in town by 2.5% to raise money for affordable housing, the Tellurneighbor Instagram page became active again, this time with a new citizens’ initiative.

The 2021 initiative was filed by three locals: Hayley Nenadal, Emily Scott Robinson, and Olivia Lavercombe. Numbers provided by the town clerk alerted the three to the fact that there were over 700 short-term rental (STR) licenses issued in Telluride—at the same time that dozens of locals were searching for homes. The three believed that at least a small percentage of those STRs were units that had once housed or plausibly could house long-term locals.

So they proposed ballot measure 300.

The citizens’ initiative ballot measure attempted to limit STR licenses to 400 in town, plus another 175 exempt licenses for full-time town residents, bringing the total to 575. (For comparison, the similar-sized town of Crested Butte has just 212 STRs.) Nenadal, Robinson, and Lavercombe joined forces and drafted the ballot measure with legal counsel, then turned to the Tellurneighbor Instagram page to spread the word.

Using infographics that painted a dramatic picture of the housing crisis and short-term rentals’ involvement in it, articles celebrating other towns’ affordable housing victories, and posts that posed questions to the community, Tellurneighbor galvanized locals to take action and encouraged them to vote in support of ballot measure 300.

The Instagram page had a dozen or so followers when it first started posting in 2019. By the summer of 2021, it had over 2,000—a significant number in a town with a population of few more.

In Telluride, where shops, lodging, and restaurants with astronomical prices cater to wealthy tourists, locals who make a living working in town often lack a place that feels made for them. During the summer of 2021, Tellurneighor was that place—even if a virtual one.

With a large platform and a potential solution to at least part of the affordable housing crisis, the locals behind the Tellurneighbor Instagram page geared up for the election cycle.

Two roads with the same end

Members of the Telluride community who opposed the citizens’ initiative couldn’t let it go unanswered, so 2D was announced as a countermeasure to 300. This new ballot question was backed by real estate agents and those who directly manage STRs, and at one point it came out that the campaign had raised over $90,000 in an effort to fight 300.

2D proposed a two-year pause on the issuing of STR licenses and suggested raising the license fees by 100% to generate more revenue that would go toward affordable housing. In 2021, the battle ensued with heated debates and passionate social media campaigns. There was even a last-ditch effort to stop 300 in the form of an eleventh-hour protest filed by a Denver law firm, which was eventually withdrawn.

In the end, 2D passed with 55.04% of the vote, and many locals were left disheartened.

“If you asked, ‘What do you want for the community?’ our answers would be the same; we just had different ways of getting there,” says Nenadal, reflecting on the conflict between 300 and 2D.

In the year since the campaign, the affordable housing crisis has not lessened, exactly, but the lower visitor numbers have helped it feel like less of an emergency, while the town has broken ground on several new affordable housing developments to ease the pressure.

Now that the dust has settled, Nenadal feels hopeful about the ability of different groups in towns to compromise about the best course of action. But she suggests that any other local thinking of taking on a citizens’ initiative should remember to “stand up for what needs to change.”

“Just know you’re entering the public arena,” she says. “How will you navigate that?”

The light at the end of the tunnel

On the other side of the 2021 discussion was Anna Wilson, a young real estate agent who got involved after the countermeasure was authored and became an outspoken advocate for the 2D campaign.

“I just knew that [300] was going to be more problematic than it would be helpful. So I started speaking about that and wanted to bring the community together to discuss alternatives,” she says. “I thought that [2D] was the right compromise for the community.”

According to an October 2021 post from the Vote Yes on Telluride 2D Instagram page (which has just 156 followers), ballot measure 300 would have resulted in a 41% loss of tax revenue generated from STRs for the affordable housing fund, compounding the problem rather than providing relief from it.

Throughout the election cycle, the 2D campaign maintained that ballot measure 300 was simply not a practical long-term solution.

Speaking about the election cycle, which took place amid the tourism crush, Wilson says, “The biggest thing I learned is how contentious the affordable housing issue is in town … I think it’s getting better now, but at the time … I understand why tensions were so high.”

In the year since the election, Wilson has continued working with the founders of 2D, putting together a nonprofit called We Care Telluride with a forthcoming housing board and other projects to help the community work together on affordable housing solutions.

Now that pandemic regulations have been lifted and visitor numbers have steadied, the focus in 2022 and hopefully moving forward is for different perspectives on the affordable housing crisis to be shared with and discussed among the community.

“We’re really seeing the light at the end of the tunnel,” Wilson says.

Nenadal agrees: “I think the most genuine [affordable housing solutions] come from the community,” she said. “And all opinions should be considered.”

The fight to ‘legalize locals’ goes on

As Telluride goes into 2022 midterm elections, affordable housing is as present an issue as ever. Housing discussions have made it into congressional campaigns—such as in Telluride’s district, where Democrat Adam Frisch is vying to unseat Republican Lauren Boebert.

In addition to having a say in the district representative race, Coloradans will also vote this week on Proposition 123, which aims to allocate a portion of tax revenue to affordable housing projects.

Leading up to the election, the Tellurneighbor Instagram page has been quiet, with its most recent post spotlighting one of the town’s affordable housing projects this past summer.

Perhaps the page’s election season silence stems from the weariness of being a voice for change, but one thing is certain: Tellurneighbor will remain an important resource supporting the Telluride community to—as its Instagram profile picture states—”legalize locals.”

Zanny Merullo Steffgen is a Colorado-based freelance writer. You can read her work at zannymerullosteffgen.com.