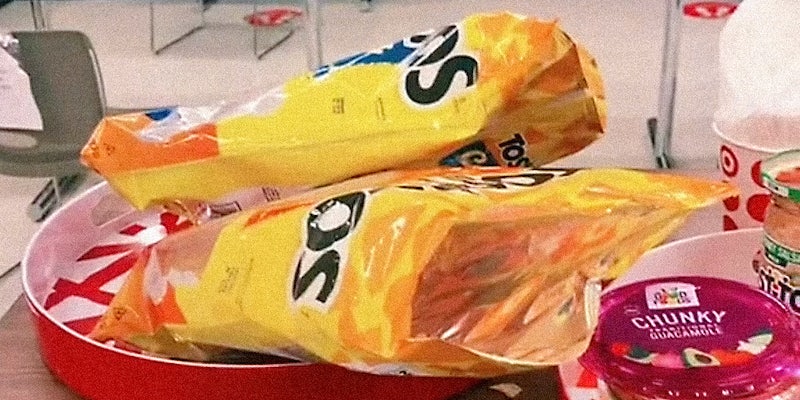 ‘I feel like this counts as a hate crime.'

A Target location is getting put on blast for supposedly giving its employees chips and salsa in support of Hispanic Heritage Month.

In a now-viral TikTok, bags of chips next to jars of salsa can be seen on a table in an apparent Target break room. A “National Hispanic Heritage Month” sign is sitting next to the snacks. “target gave out chips and salsa in support of hispanic heritage month…” the text overlay of the clip reads.

The TikTok was posted by a user named Jessica, @jessicasilvaa01, who captioned it: “boi what the hell boi” and set it to sinister music. The video has amassed over 205,000 views and 25,000 likes since being posted over the weekend.

National Hispanic Heritage Month is a period from Sept. 15-Oct. 15 designated to recognize the influence and contributions of Hispanic Americans to the United States. Many Latinos in the United States now prefer terms like “LatinX” to describe their community due to the historical context of “Hispanic.”

Several of the 758 commenters lamented Target’s lack of cultural literacy as Latino culture spans many countries, continents, and cuisines.

“The effort? NO THE LACK OF EFFORT,” said user @Cyanne.

“They think anything Hispanic is Mexican,” another user, @bakedfresh69, commented.

“Y’all are saying we should be grateful for a stereotype?,” a third wrote.

“I feel like this counts as a hate crime,” another said.

Some commenters pointed out that Target may have put out whatever was overstocked.

“Literally just gave what they didn’t sell,” one speculated.

Daily Dot reached out to @jessicasilvaa01 and Target for comment.