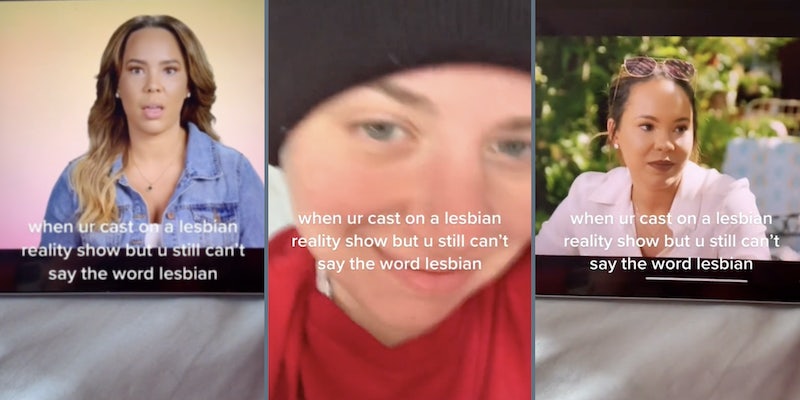 'Why is there so much discourse on the app about what we’re allowed to call ourselves?'

TikTokers are divided after a cast member on a TV show centered around queer women called herself a “le-dollar-bean” instead of saying the world “lesbian.”

Jordan Whitley, the woman who made the comment, is part of the cast of Tampa Baes, which follows a group of queer women in Tampa Bay, Florida.

“Everyone in my life knows in fact that I’m a le-dollar-bean,” she said. There’s not a lot of context around this particular scene, but TikTok user @fakeannafoster was quick to roast Whitley for her use of the term.

“When ur cast on a lesbian reality show but u still can’t say the word lesbian,” @fakeannafoster wrote over their video.

In the caption, @fakeannafoster continued: “Did you know that every time you say le$bean it takes a year off of a lesbian’s life expectancy.”

“Le$bean” is often written in place of the word “lesbian” on TikTok to prevent a video from being taken down by the platform’s moderation system. TikTok has been criticized in the past for censoring LGBTQ+ content.

Other users were quick to agree with @fakeannafoster’s critique. Many accused Whitley of treating “lesbian” like a bad or shameful term.

“It was funny as a joke for a second, but this has gone to the point of shaming lesbianism again,” wrote one person.

“Lesbian isn’t a bad word,” commented a second person. “Queer was used as a slur more predominately. Reclaim them all!”

“IT’S LIKE SHE THREW UP IN HER MOUTH SAYING IT WHY,” said a third.

Some other commenters, however, were more sympathetic to Whitley.

For example, one user, who said they are gay, admitted it makes them “a little uncomfortable” to use that term because of how they were treated when they were young.

“Why is there so much discourse on the app about what we’re allowed to call ourselves?” wrote another person. “I’m officially scared of lesbian comment sections.”

To this comment @fakeannafoster replied: “Because people are too busy wanting to have a special label to fit their exact experience of the universe instead of going out and actually experiencing the universe! Love to see it.”

The Daily Dot has reached out to @fakeannafoster and Whitley via TikTok comment.