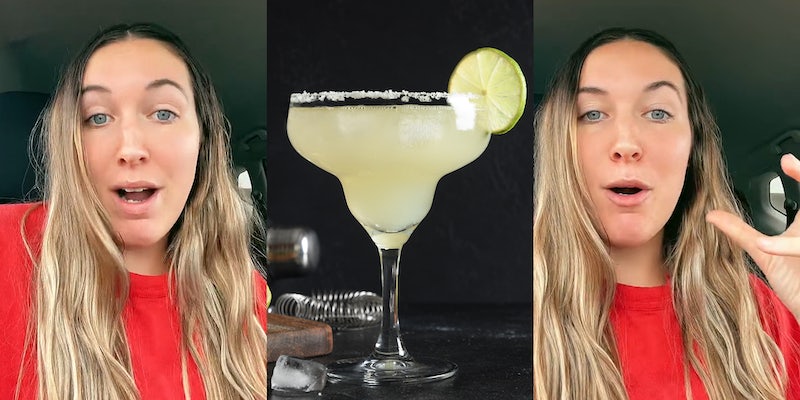 'I don’t understand why people have to act like that just for a drink.'

A server says that a table was asked to leave after one of the patrons refused to show her ID, sipping the drink of her of-age companion anyways.

In a two-part storytime posted by TikToker Shelby Edwards (@shelbymedwards) on Aug. 17, she says that she was serving a table with two diners who were waiting for a third patron to join them. She says she checked the ID of one guest, who ordered a margarita but noticed that the third patron who joined after the drinks arrived at the table was “the same age or younger than the guy.”

“I go up to the table and ask her what she’d like to drink, and she looks at this guy’s margarita, goes to pick it up, and says, ‘What kind of margarita did you get?” Edwards says. “Before she can take a drink, I said, “Hey ma’am before you drink do you mind if I check your ID real quick?”

According to Edwards, the woman said her ID was “in the car” and took a “big drink” of the margarita.

“I said, ‘Ok ma’am. You’re going to have to go out to your car and get that. I can’t have you drinking this margarita without seeing your ID,'” Edwards continues. “The older woman goes, ‘This is ridiculous. She’s literally 25. I have a picture of her ID on my phone.'”

Edwards says that the man eventually went to the car to get the younger woman’s ID, letting her manager know the situation when she went to the back to “get the girl a water.”

“As I’m setting the water on the table, the girl picks up the margarita, turns and looks at me, and starts drinking it,” she says. “I was like, ‘Ma’am, I’ve already asked you one time, please don’t drink that margarita again until I see your ID, or I will remove it from the table.’ The older woman proceeded to give me attitude and said, ‘What are you? A cop? Because all you’re doing is killing your tip.'”

Edwards continues to say that they eventually asked for a “whole new server,” which she reported to her manager. She says that her manager approached the table and let them know that she was “doing her job correctly,” saying that “if she wants to drink, she has to show ID because it’s literally the law.”

In a second video, Edwards claims that the patrons told her manager that she had threatened to “drag them out of the booth,” if they didn’t show ID. She says her manager denied their accusations, explaining that Edwards just said she would “remove” the drink from the table if the third patron continued to deny showing her ID.

She says that as they were leaving, the younger woman dumped ‘the drink all over the table” and cursed at her manager. On their way out, Edwards says her manager told them to “have a nice evening,” prompting the potentially underage guest to turn around and accuse the manager of “harassing” them.

The two-part storytime has amassed a total of over 374,000 views, with commenters blasting the patrons for their “entitlement,” many suspecting that the younger woman wasn’t of age.

“All of this because she didn’t want to show her ID. They probably thought a temper tantrum would work bc a ‘customer is always right,'” one commenter wrote.

“She didn’t show her ID because she wasn’t 21. She is her mother’s daughter. I have so much respect for you!!!” another said.

“I don’t understand why people have to act like that just for a drink. Pathetic,” a third added.

Others suggested that the restaurant press charges over the younger girl slapping her manager when she tried to take the drink.

“What if ur Mgr pressed charges, the cops show up, and now it’s underage drinking and mom providing alcohol to a minor,” one user suggested.

“Call the cops so ppl like this are held accountable for their actions and learn this behavior is NOT okay,” another wrote.

The Daily Dot reached out to Edwards via email.