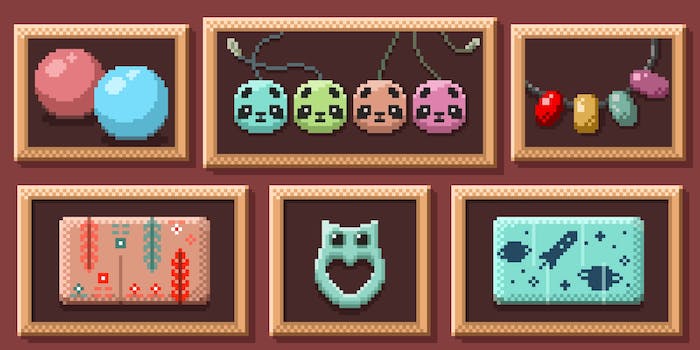 Meet the company that’s making jewelry for adults with autism

For the autistic community, such controversy remains over “stimming,” or self-stimulatory behavior. These often-involuntary actions—like rocking back and forth, flapping a hand, or humming—are seen by many outside the community as distracting or inappropriate.

But instead of trying to curb stimming, one entrepreneur has decided to embrace it.

Cynthia Kim founded Stimtastic a year and a half ago, with the simple tagline: “Because stimming is what we do.” Her company specializes in jewelry that works in congress with various stimming behaviors—whether it’s a spinning ring, a chewable necklace, twisting bracelets, or an iPhone case that acts as infinite bubble wrap.

Stimtastic does sell toys as well, but the focus is on adults. Kim was diagnosed with Asperger syndrome, a previously separate subtype of the autism spectrum disorder, at 42. She began blogging about her experiences, which lead to writing a few books. However, after developing a language impairment, she looked for other ways to remain active in the autistic, or neurodivergent (a catch-all term for being neuro atypical) community, and realized there was a void where adults with autism felt comfortable shopping.

“So many businesses that serve the autistic community are either parent/child focused or have a pathologizing tone,” Kim told the Daily Dot. “My goal for Stimtastic and for the products we sell is to help adults and teens who stim feel not just comfortable but celebrated.”

Stimtastic’s products started gaining popularity, especially on Tumblr, among stimming individuals who’d never had anything made with them in mind. Kim specifies the durability of certain pieces, and even has some that were made at the request of Tumblr followers. And many find that the jewelry makes them more comfortable with stimming, while helping to destigmatize the practice among their peers.

Tumblr user “Tessa” wrote that her classmates seemed interested, in a positive way, in her chewable necklace. “It’s weird because I spent all of my childhood learning to hide stimming because I was told constantly that people would get upset at me,” writes Tessa on Tumblr. “But now that I’m more open with stimming, I’ve had more people interested in what I’m doing than getting upset at me.”

According to the Autism Research Institute, there are multiple theories as to why someone might stim. And it’s not just something people with autism do—if you’ve ever bounced your foot, repeatedly tapped a pen on the table, or generally moved around because you’ve felt restless, bored, or nervous, that’s stimming.

However, stimming has long been considered taboo, and many parents, doctors, and therapists seek to curb it in children with autism. Though it’s important to temper self-harming behaviors, stimming is often harmless, and is only curbed because it makes others around the individual feel uncomfortable or awkward.

In an article for Autism Asperger’s Digest, Dr. Temple Grandin recommends that children with autism only be allowed to stim in private, and as a reward for not doing it elsewhere. Online parents often ask how to stop this behavior, saying it’s inappropriate, impolite, and “people are starting to notice.” And the Autism Research Institute says there are ways to encourage “alternative, more socially appropriate, forms of stimulation,” and that sometimes drugs are used.

However, Ari Ne’eman, president of the Autistic Self Advocacy Network, wants to fight this notion of what is socially acceptable and believes companies like Stimtastic are doing great work.

“When educators and professionals tell a child ‘quiet hands’ in response to hand-flapping, they are teaching that child that the way they naturally move and interact are is wrong. This can often lead to long-term trauma, depression, anxiety, and other negative consequences,” says Ne’eman. “We need to understand that forcing autistic children to try and look and act more normal doesn’t make a neurotypical child—it just makes an autistic person, who must manage the burden of pretending, to be someone they are not.”

Nicole Cliffe, the mother of a neurodivergent child, says that phrases like “quiet hands” are red flags when she searched for a therapist. “I ask right away how they feel about stimming,” she told the Daily Dot over email. “I want to hear that any non-self-harming stimming is a-OK.”

According to Kim, the stigma about stimming “puts the burden on the autistic person to not stim in public, so we don’t make others uncomfortable.” Instead, Stimtastic’s products make it so that the person using them can choose discretion or openness with their habits, and stim in a way that makes the behavior easier.

“For an adult who has spent years or decades having to suppress their stims in certain settings, knowing that they can now walk into a meeting or classroom wearing an item that will allow them to quietly stim can be empowering.”

Now that Kim has already provided opportunities for customers with autism, she wants to work on “expanding our work with neurodivergent artists and crafters,” and getting more community input. Because if no one else is going to cater to their community, Stimtastic is going to build its own.