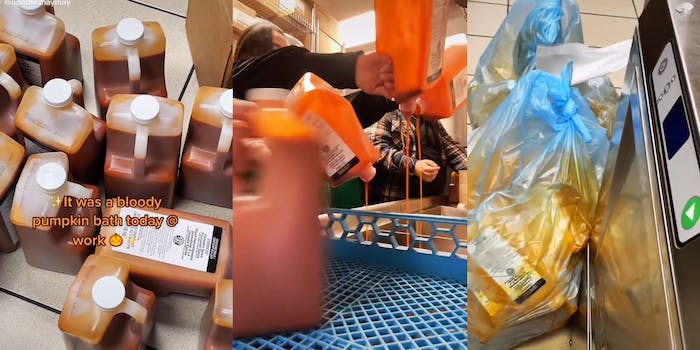 ‘Why not just donate it? So wasteful’: Starbucks workers dump containers of pumpkin syrup in viral TikTok, sparking outrage

'Hope Starbucks gets BLASTED for this.'

TikToker @noodle.maymay, who often shares videos from her job at Starbucks, shared what her store does with leftover syrup: They pour it all down the drain.

In the viral video that’s gaining traction, with 20,000 views, at least a dozen Starbucks pumpkin syrup containers are poured down the drain.

“It was a bloody pumpkin bath today at work,” the text overlay on the video notes.

“PSL Season is officially over,” the video is captioned.

Many viewers expressed their outrage and accused the chain of being wasteful in the comments section.

“That’s a whole lot of waste,” one user commented on the video.

“Hope Starbucks gets BLASTED for this,” another said.

“Why not just donate it? So wasteful,” a third wrote.

Others, including some Starbucks workers, were surprised that the workers were told to pour out the product.

“My starbs usually just makes the drinks until they run out we had them up until February I think,” one wrote.

“Really? My manager made us throw them away,” @noodle.maymay responded.

Another user who worked at Dunkin’ says they just offered the flavor as an option until they didn’t have it anymore.

“We offered it until it finished in the middle of summer,” they added.

Many told the TikToker she should have just taken it home; @noodle.maymay said she wasn’t allowed.

“Unfortunately we can’t take any home,” she responded.

It’s all a strange move considering just months ago Starbucks was experiencing a major shortage in supplies. Many drinks were taken off the menu. Some workers were even going to their local grocery stores to buy products to make the drinks.