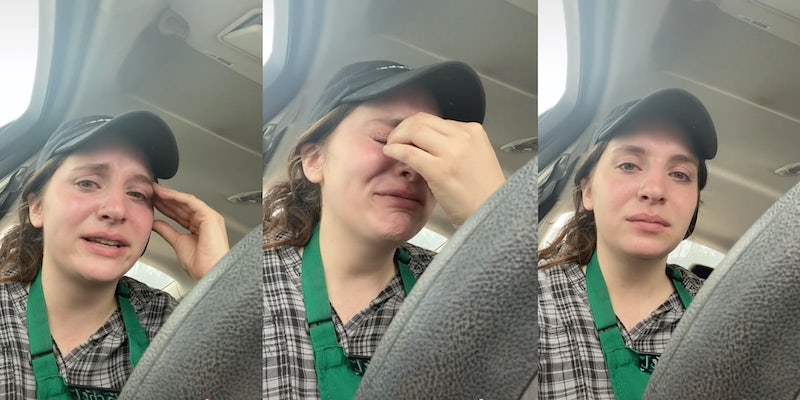 ‘I’m going as fast as I humanly can’: Starbucks worker breaks down over mistreatment in viral TikTok

The worker tearfully admits that she was jealous of a co-worker who broke her arm because 'she gets to miss.'

A Starbucks employee delivered a stunning condemnation to people shrugging off responsibility during the pandemic in a viral TikTok.

The video, posted to @rachelkeaton’s account, has since gone viral. In the 24 hours it’s been up on TikTok, Keaton’s video has amassed more than 425,000 views, and comments are still pouring in. The clip, which clocks in just under TikTok’s max 3-minute mark, sees Keaton sharing a raw moment with her viewers following yet another Starbucks shift filled with difficult, entitled customers.

Still in uniform, the young Starbucks employee sits teary-eyed in her car for the duration of the video. She begins the clip by dedicating it “to the lady who said it wasn’t her problem.”

Keaton then provides some background, explaining to viewers that the Starbucks location she works at has been swamped. Sunday was no different: She says employees had mobile orders stacking up alongside “dozens” of in-person customers crowding the interior of the store. To top it off, she says one of the store’s ovens was broken, leaving employees scrambling to fill food orders.

At this point, she dives into the meat of the story. Noting that “people don’t understand,” Keaton launches into an explanation of what the service industry has been like for employees during the pandemic. She points out that numerous people have left their jobs due to the increased stress, danger, and workload heaped upon them over the last year and a half. While she doesn’t blame them, she says the result is more work and pressure for those who remain. The issue, she points out, is not with these employees leaving, but with “the customers who are coming in and not being understanding—and, quite honestly, being an asshole.”

“I think we’re in this predicament because you think it’s not your problem,” Keaton says. “You expect all of the food industry workers to adjust with working during a pandemic, you expect us to be working—short staffed—for your orders to come out.” She notes that people continue to treat employees “as if we’re not human beings who are making all of these things” and blasts customers for not being expected to “have patience or understanding.”

“I think the issue is that you think it’s not your problem,” she says again. Noting that the video was filmed on a Sunday, Keaton—indicating that the customer may have been upset because they were late for church—explains that regardless of where you may need to be, it’s no excuse to treat other humans poorly.

Keaton then tries to explain the reality of what she and her fellow employees have been dealing with during the pandemic. She explains that people are late to, or completely missing, breaks in an effort to keep up with demand. The stress from work, she notes, is pushing employees to the brink of exhaustion. In a genuinely illuminating moment, Keaton tearfully admits that she was recently jealous of a co-worker who broke her arm because “she’s really lucky, she gets to miss.”

She goes on to admit that she has hoped in recent months for any excuse for a break. She says she would even welcome getting fired because then she could “file for unemployment and I can actually have time to look for a new job.”

Admitting that she “can’t do it anymore,” Keaton points out that “for every one person that’s understanding and has patience and is, like, kind, there’s like five other people who are not, and are really mean.”

The TikTok concludes on a strong note, with Keaton again returning to the central point of her video. She states that “no, it’s not your problem. But, I mean, it should be. Or it shouldn’t even be a problem, to begin with.”

Keaton’s emotional video quickly began collecting comments and reactions from viewers, many of whom condemned rude and demanding customers. The issue, many commenters pointed out, is that “when COVID started we had a good 3 months of customers understanding issues, then it got 10X worse.” In the initial months of the pandemic, as Keaton noted in a response, “essential” employees were treated like “heroes,” only to have customers flip on them once the pandemic stretched longer than expected and people “forgot we were human beings.”

Dozens of commenters shared their own stories of “constant cruel and hostile mistreatment at the hands of others.” The experience seems to be consistent across essential fields, as commenters working in retail, food service, and even hospitality shared similar experiences.

Several viewers attempted to troll Keaton, calling her out for “crying” instead of simply ignoring the negative customers. Keaton responded to a few of these commenters in follow-up TikToks. Noting that she understands the sentiment, Keaton attempted to paint a picture of the stress employees are put under when “30, 40 people are staring at you and demanding that you help them all at once.” She also pointed out that during the majority of her 8-hour shifts, it is “constant.” Thus, she and her fellow employees cannot simply “turn off” their emotions when it comes to rude customers. She also blasted Starbucks as an employer for always expecting its employees to step up while allegedly not stepping up itself to support its employees.

Keaton, for her part, is using the opportunity to educate uninformed viewers about the stress and struggle of working in retail, food service, and other similar jobs. She explains, in another follow-up, that crying—an act which several people called her out for—is “something that is connected with trauma, with pain.” She points out that the last two years have been “traumatic” for people working in jobs like hers, with no end to the struggle in sight.

The Daily Dot reached out to Keaton and Starbucks.