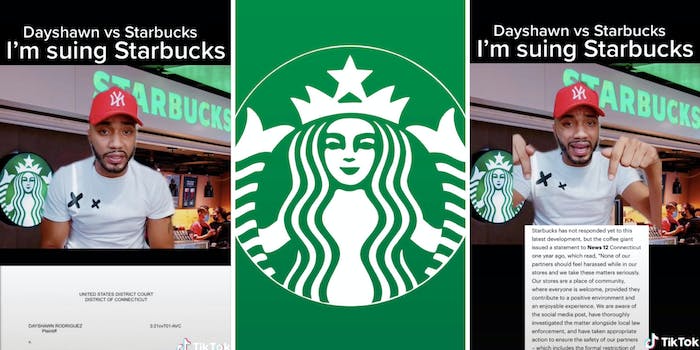 Dayshawn Rodriguez says Starbucks failed to protect him against a customer.

A former Starbucks supervisor recently announced on TikTok he is suing the company for discrimination. He alleges his managers failed to protect him against a white customer who racially harassed, stalked, and assaulted him. He is asking TikTok for help amplifying his story.

In the viral TikTok, which has over 31,000 views and was posted on Sunday, former Starbucks shift supervisor Dayshawn Rodriguez says a white woman harassed him, poked him in the chest, and called him racial slurs for over nine months while he worked at Starbucks.

Rodriguez says he is now suing the massive coffee retail chain for racial discrimination after he quit his job because his managers allegedly failed to ban the customer or provide him with any protections.

“I had made the proper incident reports and spoke to the proper people at Starbucks management and they did nothing. When I decided to tell the customer the next day that she could not come in, I got in trouble,” Rodriguez says in the video.

“When my District Manager came to sit down and speak to me about it, she told me that I might be too sensitive for my job, especially if I feel like the N-word hurt,” Rodriguez says. “Before even speaking to me, she spoke to the customer and decided to stay on the customer’s side.”

After Rodriguez quit his job and spoke out to the press, he says Starbucks decided to finally ban the customer and investigate the situation. Rodriguez says Starbucks is now trying to silence him.

“Starbucks is trying to enforce an arbitration agreement and allegedly trying to silence me into going behind closed doors to speak to them about my case when this should be public,” Rodriguez says. “I feel like Starbucks is trying to take advantage of me in court because there’s no media attention on this and nobody’s eyes on this. That’s why I really need you guys to really share this.”

Users in the comments section rallied in support of Rodriguez and tagged Starbucks to call it out.

“Don’t give up. All current partners have little to no corporate support against abusive customers,” one user commented.

“@Starbucks shame, I can’t believe that your organization would allow customers treat your employees this way,” another said.

Rodriguez has attracted hundreds of thousands of views on his TikTok account, posting various videos about his experience. One viral video, which received over 74,000 views, shows footage of a statement given by Sen. Richard Blumenthal (D-Conn.) in support of Rodriguez.

This fall, Rodriguez filed a complaint with the Equal Employment Opportunity commission, who has now allowed him to pursue a lawsuit against Starbucks, according to News 12. There have not been further updates to how the lawsuit is going.

Meanwhile, Starbucks continues to face heat from workers in a mass unionization drive this year, with many current and former employees speaking out about working conditions. Over 70 stores voted to unionize and over 150 stores filed petitions for union elections, according to the New York Times.

Update 6:13am CT, May 24: When reached for comment, a spokesperson for Starbucks told the Daily Dot it “thoroughly investigated the matter alongside local law enforcement, and took appropriate action to ensure the safety of our partners.”

The spokesperson said the customer was ultimately restricted from stores in the area.

“Our stores are a place of community, where everyone is welcome, provided they contribute to a positive environment and an enjoyable experience. None of our partners should feel harassed while in our stores and we take these matters seriously,” the statement continued.

The Daily Dot reached out to Dayshawn Rodriguez for comment via email.