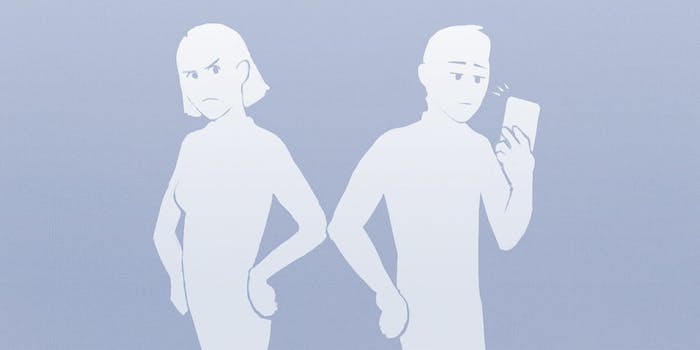 It’s complicated: Why following your significant other on social media is a bad idea

A couple's therapist says put down your iPhone and enjoy your significant other IRL.

The psychotherapist, who specializes in couples counseling, recently told Public Radio International that contrary to what your friend who posted 700 newlywed shots from her honeymoon thinks, being connected to your partner on social media is ultimately detrimental to the health of a relationship.

While many are quick on the trigger, posting every photo, tweeting every funny story, and writing mushy Facebook posts about a new bae, Kerner says that you’re probably a lot better off holding back. Instead of focusing on documenting the relationship on social media, he advised couples to just focus on being in the relationship.

Kerner copped to unfriending his own wife after realizing that it wasn’t doing a service for their marriage. “I didn’t want all of that extra information. If anything I wanted less information—I wanted more mystery and more unpredictability. I didn’t want to know that she was posting about being tired or having her third coffee for the day. So I specifically unfriended her during my brief tenure on Facebook. It’s something that I do recommend to couples.”

It’s all about the status updates

However, for younger couples—those in the millennial generation—being connected on social media is “real” and, for them, “genuine.” Or maybe they don’t realize just how distracted they really are. After posing the question “Should you be friends online with your significant other?” to friends, co-workers and friends-of-friends-and-coworkers, I wasn’t surprised to hear that nearly of those in relationships were not only friends on multiple platforms with their partner, but considered it an important cornerstone of the relationship.

“I think the advantages are the ability to tag/share/create memories with your significant other and friends,” Rachel*, a 27-year-old event planner in New York City, told me. “You continue to find friends-of-friends in common, but also it’s a way to document the things you do together as a couple. Not to mention, family from other places can follow along.”

Have we reached a point where a person’s social media adeptness could be considered an important trait in a mate?

Rachel and her boyfriend met via dating app Hinge, which a 2014 Pew Research study says could explain a greater willingness and openness to being connected online.

“Couples who have been together for a decade or less—also typically younger than those who have been together for longer—are much more likely to have used dating services or the Internet to meet their partner, to use technology to help with the logistics and communication in their relationship, and to report that the Internet had an impact on their relationship,” the data found.

Have we reached a point where a person’s social media adeptness could be considered an important trait in a mate?

“One of the things that I love about my partner is how funny she is, and her social media presence makes me smile,” Stephen Torok, 27, said of his long-distance girlfriend. The Philadelphia-based lawyer noted “It doesn’t necessarily keep me up on what she is doing, because we are in constant contact, but it’s nice to see, regardless.”

How much is too much?

But even for those who say they’re fully connected online, most admit that the territory is rife with opportunities for jealousy and misunderstandings, unwanted blasts from the past and unnecessary information.

“You are able to see everything. If you choose to snoop, you will also see things you don’t want to see,” Serena, a healthcare worker in a two-year relationship, said.

The 27-year-old described all the things that could drive a person crazy: “You’ll see his ex or ex-hook ups commenting on his wall, pictures, past messages, current messages etc. and sometimes they may not always sound like they are coming from the person you think you are dating.”

“A partner could read too far into some aspect of your online personality and think it’s a reflection of the relationship.”

She recalled a time when she had to confront her boyfriend about certain online interactions that were not good for their relationship. “When we first got together, a girl he used to hook up with LOVED to Facebook chat him because she knew she shouldn’t be texting him at that point,” she said. “But I saw it all and I shut it down very quickly.”

My friend Mona is happy being connected to her boyfriend on Facebook, Twitter, Snapchat and Instagram, but is acutely aware of how easily things could go awry.

“Your online presence has the potential to show your TRUE feelings and your true self, but many people just put their most likeable self on the Internet,” the 27-year-old said. “So taking the stance that it’s your truest self, a partner could read too far into some aspect of your online personality and think it’s a reflection of the relationship.”

She recalls getting mad at an ex-boyfriend for not liking a selfie of her new haircut that she put up on Instagram, exposing how there can be certain expectations attached to being online friends with a partner. Mona’s boyfriend later called her out on the theatrics. “He was right, which is the most annoying part,” she said.

There are the few, though, who don’t see the value in linking up online when you can link up IRL.

“I don’t see any benefits. It might seem like another tool to communicate with each other, but when you already have email, text, and phone, what’s the point? Just because we have more ways to be connected doesn’t mean we’re actually connecting,” Nico Lang, the Daily Dot’s Opinion Editor said, echoing Kerner’s observations. “I don’t want to mistake a Facebook relationship for the real thing.”

Lang, who is currently in a relationship, learned the hard way from past relationships that lack of trust online has only lead to heartache. “We end up in a huge, unnecessary argument over something that had nothing to do with them. Pass,” he says.

But for better or for worse, the Pew study found that “41% of 18-29 year olds in serious relationships have felt closer to their partner because of online or text message conversations.”

One female Public Radio International caller rather sadly admitted that her husband would sometimes “rather hold his iPhone than hold my hand.” But for many young couples, it seems that they’d like to hold their iPhone in one hand, while holding their partner’s in the other.