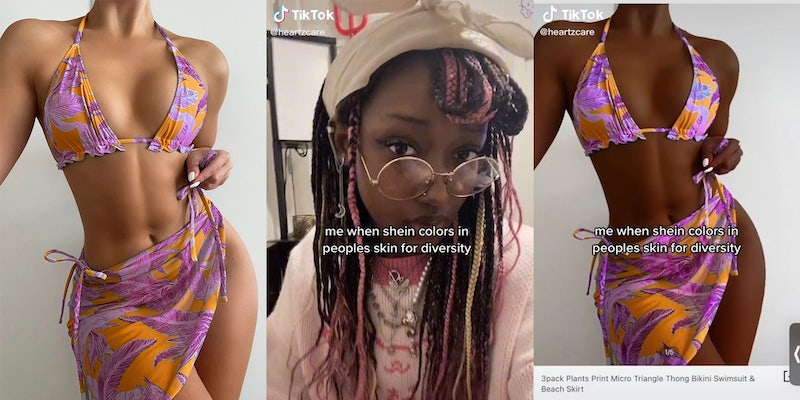 Update 4:15pm CT, March 25: When reached for comment, a Shein spokesperson told the Daily Dot in a statement: “We were surprised to learn that one of our suppliers provided photos which were altered in an unacceptable way. We are contacting the supplier and have removed the images from our site. We celebrate diversity in all shapes, sizes and colors, and these images did not accurately represent that.”

Original story: A TikToker claimed fast-fashion e-retailer Shein edited a model to appear darker than they are for “diversity.” TikTok user @heartzcare shared a screenshot of an allegedly edited model from the brand’s online catalog.

“Me when Shein colors in peoples skin for diversity,” the overlay text in the video reads. The creator then lip-syncs to the trending sound “what the fuck was you thinking” before showing the model clad in a sheer bikini. The video zooms in on what seems to be the model’s poorly edited hand, with white skin still showing. It then zooms in on the transparent waist wrap which similarly seems to show a portion of skin that wasn’t edited completely.

The TikToker told the Daily Dot she came across the photo while looking for a bathing suit on Shein’s website. She said she first clicked on a photo of a “dark skin woman” in a pink swimming suit and noticed the “trash” quality of the images. She then clicked on another color selection and noticed this model had the same pose, same nails, and same body. Except this time, she was white. The creator showed the difference in another video, which seems to prove that at least one of the photos was edited.

“I chose to share it to TikTok to show how brands treat black women,” she told the Daily Dot via TikTok direct message. “They don’t wanna hire us or put any money in the black community.”

“As an influencer [I try] to educate my followers on how trash big companies are and how disgusting they would treat animals, the Earth, and minorities just for some fast cash,” she continued. “It does affect how I view this company because a few days later I went to go check on the picture and it was completely gone.”

The TikTok gained 4.3 million views and almost 10,000 comments since being posted on March 16. The majority of the top comments are from users claiming the editing is obvious and criticizing Shein for the alleged “Photoshopping.”

“You can literally tell that it’s a white person too,” a top comment with 39,000 likes reads.

“Their editing has been a bit sketchy recently,” another user commented.

Many viewers questioned if the global online retailer could not afford to hire black models.

Many replied stating that Shein in fact doesn’t use models at all.

“They don’t have models they have stolen pictures,” the creator replied to a viewer.

“They literally steal every photo w out a face in it so they don’t have to hire models,” another user accused.

Others were surprised this was the creator’s “last straw” with the company. Many accused the company of also practicing harmful labor policies.

“This is the last straw for u guys? they don’t even use their own photos, they steal designs, and abuse workers. like, it was bad before,” a user commented.

“This company literally exploits child labor and polluted the planet, but the final straw was coloring in a model?” another viewer asked.

On its U.K. website’s social responsibility page, the retailer states it “strictly abide by child labor laws in each of the countries we operate in.” It also pledges that there is no forced labor, stating their “strong belief in ethical working conditions.” However, a detailed report released by the Public Eye in November 2021 accused the China-based company of violating Chinese labor laws. The report also claimed employees worked 75 hours a week. According to Business of Fashion, Shein said it would launch an investigation once it reviewed the report. It is unclear whether the company provided transparency in its manufacturing since then, but still, many aren’t convinced.

According to the creator, she maintains that Shein is a “gross company” that allegedly uses child labor and “adds on to the many issues we already have in this world.”

“I hope sheins company gets destroyed,” the creator said. “I also hope the people who are in charge of it go in debt after gaining the money off those kids.”