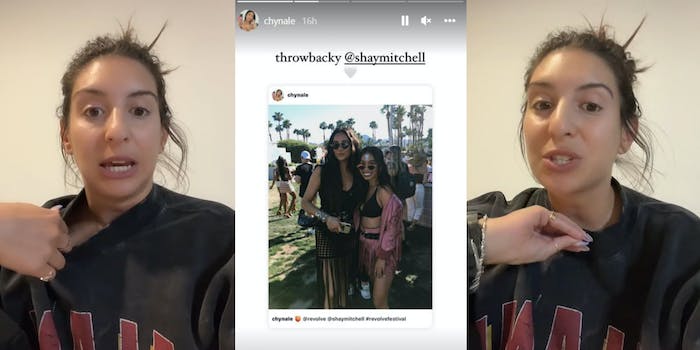 ‘She made me feel like the scum of the Earth’: TikToker says Shay Mitchell made her cry after she told her they were ‘twinning’

'I will just never ever treat someone that way.'

A TikToker says that when she tried to say hi to Shay Mitchell at a musical festival in 2019, the Pretty Little Liars actress didn’t acknowledge her.

Brittni Joy, who posts TikToks about fashion and traveling, published her first video about her interaction with Mitchell on Tuesday. By Thursday, the video had over 352,000 views. She initially didn’t say Mitchell’s name but confirmed the celebrity’s identity in later videos.

In her original video, Joy said Mitchell made her feel like “scum of the motherfucking earth” when she told Mitchell that the two of them were “twinning” in similar outfits.

Joy explained when she approached Mitchell, the actress “looked her up and down,” and then turned away from her. Joy also said a hairstylist of Mitchell’s told her, “Yeah, and that’s a ‘bye.'”

“I just wanted to tell her that I admired her,” Joy said. “I literally walked away crying.” The TikToker added that she unfollowed Mitchell on social media immediately after their interaction.

In an email to the Daily Dot, Joy said she “had zero intention of ever revealing who it was.” But after commenters identified that Joy was talking about Mitchell by pointing out the similarities in their outfits at a 2019 festival, Joy confirmed in a TikTok that she was speaking about Mitchell and showed photos of their outfits.

Joy also posted a TikTok showing Mitchell’s Instagram story from Wednesday, which shows a photo of Mitchell and a fan at Revolve Festival in La Quinta, California, in 2019.

“Can we all agree that it’s just funny?” Joy says after Mitchell posted about the festival so soon after Joy posted about it on Tiktok. “This is comical.”

Mitchell said in her story that she loves meeting fans. Commenter @katherinevanmck wrote that the actress was doing “damage control.” In another TikTok, Joy said that her interaction with Mitchell has “stuck with” her.

“I will just never ever treat someone that way,” Joy said in a follow-up TikTok.

Some commenters on Joy’s original video discussed the differences between how celebrities act on social media and in real life.

“All these celebs who try to be funny and relatable on social media are mean girls irl,” @georgiapeachhhh commented.

“I’ve heard this about her before and it’s so sad bc she doesn’t come off this way at all,” @0sonialina0 commented.

Others praised Joy for her composure with Mitchell.

“You better than me cause I would have cussed her ass out,” @jordantwynn commented.

Joy told the Daily Dot that she doesn’t want Mitchell to be “canceled” for the interaction but that she hopes she learns from it.

“I do believe in human decency and kindness and I think we all could learn from it,” Joy told the Daily Dot. “No matter who you are you don’t know how you’ll impact that person.”

The Daily Dot reached out to Mitchell’s team.