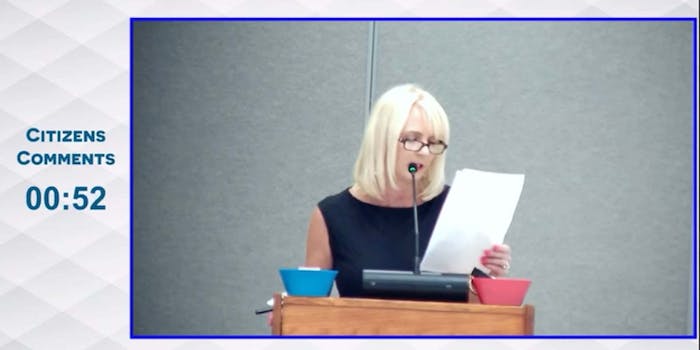 ‘She enjoyed reading that for sure.'

A white woman recited the lyrics to N.W.A.’s “Fuck Tha Police” at a Leander Independent School District (ISD) school board meeting in Leander, Texas. She said the N-word twice.

A video of the moment was posted to Reddit by @flowbotronic on Sept. 10.

“This is in your curriculum,” she says after reciting the lyrics. “How do you defend that?” She seems to be protesting the inclusion of the song in the school’s curriculum by reading it aloud at the school board meeting.

“This is *not* appropriate for the classroom,” read the post. “What are the curriculum developers thinking?”

The post also advertised a planned sick day that occurred in April to protest the curriculum.

“Fuck Tha Police has significant and strong historical underpinning and absolutely should be discussed in school. As evidenced by this lady, its still tilting motherfuckers 3 decades later,” wrote @Halvus_I.

@Denotsyek commented that the woman “probably” thinks the woman considers Critical Race Theory to be rap lyrics as well.

Others remarked on the way she said the N-word. “She enjoyed reading that for sure,” one said.

Another commenter, @HairHeel, seemingly identified the article in question to be Vox’s “The history of American protest music, from ‘Yankee Doodle’ to Kendrick Lamar.”

The Daily Dot has reached out to @flowbotronic via Reddit direct message.

Update 11:14am CT, Sept. 15: In an emailed statement to the Daily Dot, Leander Independent School District clarified that “Fuck Tha Police” is not explicitly part of the AP English 3 curriculum.

“In the third unit for this college-level course focusing on rhetorical appeals, teachers are provided a list of 49 optional text pairings to choose from in a variety of categories including art, photography, poetry, songs, speeches, and essays,” the statement said. “One of the optional articles is an in-depth study of American protest music with a detailed history spanning over 200 years, beginning with ‘Yankee Doodle’ during the American Revolution.”

The district pointed to a Vox article that chronicles the history of protest music in the U.S. The article references “Fuck Tha Police” and includes an age-restricted YouTube link to the song.