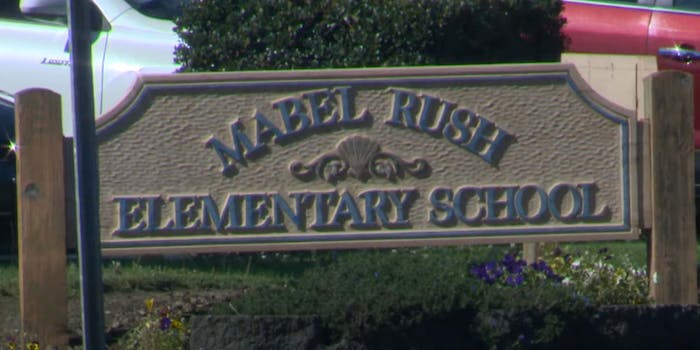 'I feel segregated because I am unvaccinated.'

After being told that she needed to socially distance from students at her school on Sept. 16, unvaccinated employee Lauren Pefferle showed up in blackface because she felt “segregated” from the rest of the school.

According to local news outlet KGW8, Pefferle has since been fired from Mabel Rush Elementary School in Newburg, Oregon, where she worked as an aide for students in special education. The Newburg Graphic, another local outlet, reported that the school mandated that staff members be vaccinated, and Pefferle specifically darkened her skin using iodine.

“I feel segregated because I am unvaccinated,” Pefferle told Lars Larson, a Portland, Oregon radio host, on his conservative podcast. “So, the next day, I went to work and I did put on some darker color on my skin part that showed.”

A teacher who works nearby, TikTok user @skatepaige, Pefferle posted her reaction to Pefferle’s comments.

The TikToker posted snippets of Pefferle’s interview where she told Larson that she doesn’t know the term or meaning of blackface.

More of Pefferle’s comments were posted by Ryan Clarke, a local Newburg reporter who has been covering the story.

“I’m representing Rosa Parks today regarding segregation,” Pefferle recounted to Larson about how she explained doing blackface to her colleagues. She also said she didn’t think her actions and choices were wrong.

Pefferle was initially placed on administrative leave. Clarke has since reported that she has been fired, which he confirmed with an employee at Mabel Rush elementary school. Clarke also told the Daily Dot that he confirmed the employee had been fired.

KGW8 reported that Joe Morelock, the superintendent of Newburg School District, said that the district’s students of color deserve better.

“It is unfathomably offensive,” he said. Morelock’s remarks were also in reference to a Snapchat group chat that joked about slavery and auctioning off Black students among students at Newburg High School, which was discovered on Sept. 15. The chat was called “Slave Trade.”

“We’ve seen some dehumanizing and deeply disturbing expressions of racism in recent days involving our district,” reads a statement from Newburg Public Schools. “Blackface has no place in our schools, and we are committed to the work of created spaces where every student belongs as we move forward together in our mission of educating students.”

In addition to Pefferle’s actions and the racist group chat, a member of the Newburg School District schoolboard proposed a ban on “political signs” that prohibited Black Lives Matter and Pride flags from being hung in classrooms.

The ban and aforementioned incidents of racism have intensely divided Newburg. In a phone interview with the Daily Dot, Clarke said that the community is “on edge.”

“This is such an intensely political issue and folks have gotten into their camps and felt divided with their neighbors,” Clarke said. “For a lot of folks who are in opposition to what’s been happening with the ban on Black Lives Matter, Pride, and other political symbols, they feel embarrassed and ashamed because they believe that Newburg is a more welcoming town than maybe is getting portrayed on this national level.”

The Daily Dot has reached out to Mabel Rush Elementary School and @skatepaige.