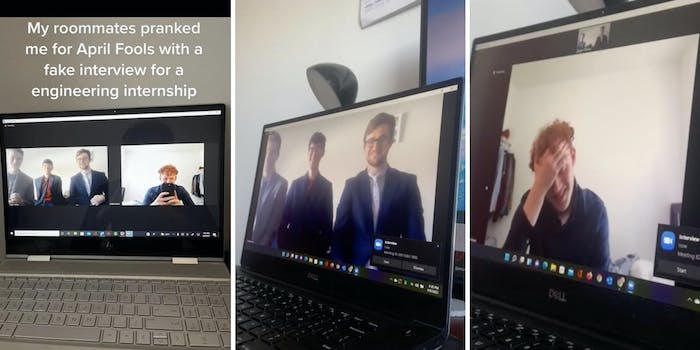 "I even told my mom I had an interview."

A man says in a viral video that his three roommates pranked him by setting up a fake job interview for an engineering internship.

The man, Caleb Moore (@cmoney42) on TikTok, shared a recording that his roommates appeared to have taken during the prank as well as screenshots of their email exchange.

Based on the screenshots, the roommates created an email and invented a man named Roger Filmen at KTM Solutions, a real manufacturing company. Then they reached out to Moore about an internship/co-op program.

While pretending to be Filmen, the roommates had Moore send them his resume and set up a time for an interview. When Moore showed up to the Zoom interview, his jaw dropped while his three roommates laughed hysterically. Moore sat with his mouth open in shock for several seconds before facepalming.

Still laughing, one of the roommates says, “April Fools’.” Another roommate attempts to ask an interview question but keeps laughing.

At that point, Moore laughs before finally saying, “You guys are assholes.”

The TikTok video went viral with nearly 700,000 views as of Monday. Viewers seemed to find the prank funny while also sympathizing with Moore.

“THATS SO MEAN ID CRY,” one viewer commented on the video with several laughing emoji.

“Imagine going through all that effort for a degree to be played like this,” one user said. In reply to the comment, Moore wrote, “I was convinced I was going to have an internship this summer.”

“Entire family:HOWD THE INTERVIEW GO? him: ya didnt get it,” one TikToker wrote.

Moore wrote back to the comment, “I even told my mom I had an interview.”

The Daily Dot reached out to Moore via TikTok comment.