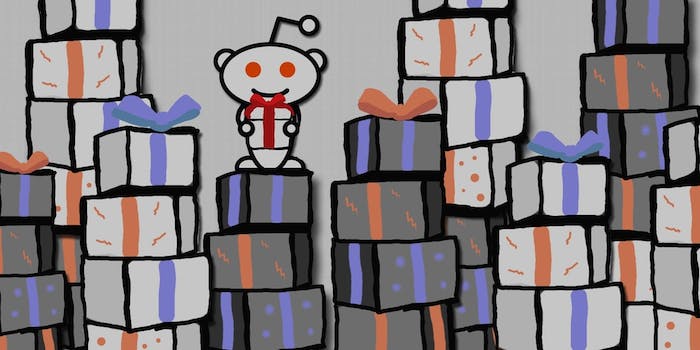 RedditGifts 2012 broke its own world record, with more than 40,000 gift-givers participating.

With all of the unseemly things Reddit is often accused of—witch hunts, sexism, and, of course, creepshots—it’s easy to forget that in 2011, redditors literally set a world record for generosity.

And now they’ve done it again.

For the second year in a row, the holiday season Redditgifts Exchange has officially been recognized by Guinness as the world’s largest.

The annual event, an online “Secret Santa,” has allowed redditors to anonymously swap gifts since 2009. Participants sign up and are given the username of a fellow redditor. Through some light, legal Internet stalking of that user’s posting history, they decide what would make the perfect gift. As the holiday season progresses and December 25 draws closer, the gifts are shipped out all over the world. Redditors are encouraged to share photos of their gifts on the r/secretsanta subreddit, where most of the Secret Santas will reveal themselves.

And the 2012 had more Santas than ever, beating Reddit’s 2011 event—and every other gift exchange in history—en route to a new record.

The announcement came in an August 27 blog post by Redditgifts founder Dan McComas.

“For secret santa 2012, we now hold a new Guinness World Record for 44,805 participants successfully completing the largest online Secret Santa game! Just think about that for a minute: 44,805 internet strangers from 130 countries put their faith in one another and exchanged gifts,” McComas wrote.

Redditors, many of whom contributed to the record, clamored into the thread to share their congratulations.

“Yeah, I mean, as much shit as reddit gets (from both redditors and non-redditors), stuff like this is pretty cool. It is legitimately something to be proud of, and is something that should be replicated in the future,” mister_ratburn said.

“We should make it a Christmas tradition to beat our own record every year!” OP_rah said.

The announcement was capped off by a plug for Redditgifts’ current project, which aims to give teachers necessary classroom supplies.

“We have a yearly drive to support teachers around the world and we REALLY need support. In one week, we have had OVER NINE THOUSAND teachers sign up needing supplies for their classrooms (we review every teacher by hand). We have so nearly 4,000 people signed up to give gifts (there’s no minimum price, anything helps), which is great, but we need A LOT more!” McComas wrote.

Beginning in November, interested redditors can sign up to chase yet another world record in the 2013 exchange.