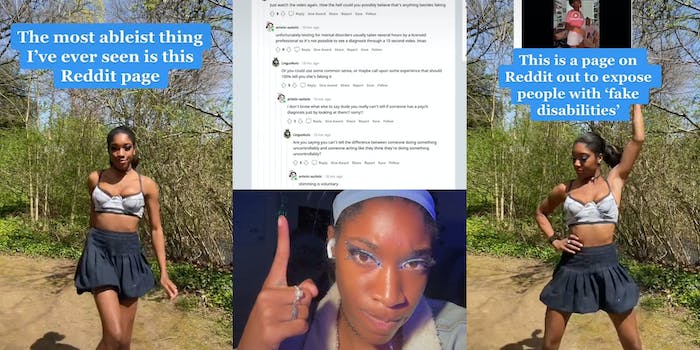 A woman called out a Reddit page dedicated to outing people with ‘fake’ disabilities. TikTokers are aghast

'Why do people hate disabled people so much?'

In a viral TikTok video, user @confidencewithrae calls out the “illness fakers” subreddit, arguing that its content is ableist and harmful to disabled people.

The TikToker shared a screenshot of a now-deleted post targeting her on the r/IllnessFakers subreddit as she dances. “The most ableist thing I’ve ever seen is this Reddit page,” the text overlay reads.

“This is a page on Reddit out to expose people with ‘fake disabilities.’ It spreads misinformation about people with disabilities and is 100% false. Just because you’re uncomfortable with my content does not mean I’m not actually autistic,” the text overlay continues.

The TikToker’s initial video calling out the page received nearly 40,000 views, and she made a follow-up video showing screenshots of Reddit users accusing her of faking her autism.

The subreddit was created in 2018 with the goal of calling out “over the top” chronic illness “influencers,” who frequently post on social media about living with their illness(es). R/illnessfakers is comprised of people who believe these “influencers” are exaggerating or lying about their illnesses or disabilities online. The page now has over 100,000 members, despite being criticized by disabled people online calling for its removal.

The videos sparked an important conversation about ableism, or discrimination in favor of able-bodied people, alongside the reality of varied disabled experiences. Many viewers noted that disabled creators who make positive content or those with invisible illnesses, chronic conditions that are not outwardly visible, are often targeted on the page.

“I hate how we can’t talk about our disabilities with a smile. Not every experience is frustrating. There’s more to it than that,” one commenter said. “I have an invisible illness and it’s horrible to see how ignorant people are about it & how they assume if you look fine then you’re faking,” a second user said.

Others argued that there are additional issues with the page, including the alleged doxing of minors and an explicit focus on women and LGBTQ creators.

“That sub is horrible and almost everyone posted on there is a woman or LGBT… it’s just blatant ableism mixed w sexism,” one user said. “It’s awful! I’ve had friends who were minors posted to there and got d*xed, I’m not sure how that subreddit is still up tbh :/,” another said.

The Daily Dot spoke to Katherine Harlow, a disability advocate, artist, TikToker, and educator who has faced similar harassment, on the impact of websites and forums like these on disabled people.

Harlow said, “I have similarly been targeted by the r/IllnessFakers subreddit. I’ve also been the subject of hate threads on LolCow and KiwiFarms. It is unconscionable that Reddit continues to allow the thread to exist.”

“I’m an autistic, disabled/chronically ill queer femme, with four disabilities: endometriosis, pelvic floor dysfunction, PTSD, and autism. I do the majority of my advocacy on endometriosis—a common but incurable whole-body, inflammatory disease—because it debilitates me the most. I found out from a supporter last summer that I was, and continue to be, the subject of these hate threads,” Harlow said.

“It’s impossible to compare the ‘disabled-ness’ of two people. Access needs, boundaries, and limitations are so variable, that the task of determining who is ‘more’ disabled than who is literally impossible. Nevertheless, [people] still carry on with this hateful, harmful, and pointless work,” Harlow said.

She finished by saying, “These people think they are doing something meaningful by creating hierarchies in disability, separating (in their eyes) who is ‘really disabled,’ and who is ‘faking for attention, clout, money.’ Ironically enough, no person, ill or not, receives any of these things by talking openly about illness. If anything, we’re punished and ostracized for talking about illness at all.”

The Daily Dot reached out to user @confidencewithrae via Instagram direct message and the moderators of r/IllnessFakers via Reddit for comments on this story.