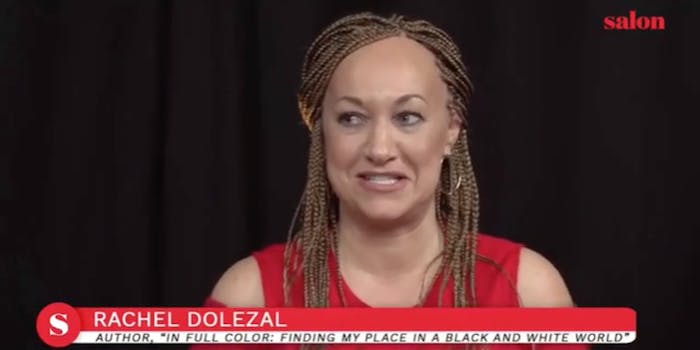 Dolezal doesn't know when to quit.

In an interview with Salon for her new book on racial identity, Dolezal, who was outed as a white woman presenting as black in 2015, compared her racial identity to Caitlyn Jenner, who publicly came out as trans shortly before Dolezal’s bust.

“There was kind of this comparison [between Dolezal and Jenner.] What’s not similar is the stigma right now. There was stigma in the past for sure, and that still perpetuates to a degree. But there’s more stigma for race fluidity than gender fluidity right now, and I don’t think anybody would deny that,” Dolezal said.

She then went on to explain how transgender and gay people were once medically diagnosed as crazy for their identities. But, you know, never mind the fact that gay conversion therapy camps still exist and transgender people are abused and murdered for existing—according to Dolezal, that ship in history has sailed. And she hopes that inclusion can extend to “transracial” people, too.

Dolezal also told Salon that she’s not the only “transracial” person in the world, offering anecdotes of conversations with black women and biracial women who have told her that they also struggle with their racial identity, too.

“I get a lot of direct messages on social media. I have heard from many black and biracial women,” Dolezal said. “They say, ‘I constantly was told I wasn’t black enough, and I finally gave in and identified as Latina for my adult life, or let people see me as white, and didn’t bother correcting them anymore—just lived however people saw me.'”

Again, but just forget that colorism polices how “black” a black woman is or isn’t, and that being multiracial comes with its own struggle of feeling too insufficient to represent any race. Nope, these kinds of struggles with racial identity are definitely “transracial” issues. Definitely.