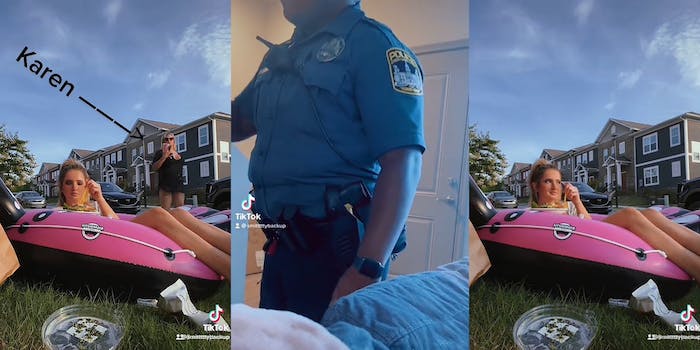 'Nothing to see here.'

A TikToker says that a woman called the police on her because she was sitting in a pool float and eating on a lawn in Athens, Georgia.

Paige Smith (@smitttttybackup) posted a video of herself eating on the pool float on Sunday. The video shows her eating when a woman walks behind her, seemingly filming her. Smith then gets out of the float and says “nothing to see here.”

The woman she dubbed a “Karen” speaks to her off-camera. Another clip then shows a police officer talking to Smith’s friend.

On Thursday, Smith’s video had over 2 million views.

In a follow-up TikTok, Smith says that the woman called the police on her a second time for playing music loudly at her pool.

“It’s not even loud at all,” Smith says of the music she is playing in the video.

Commenters on Smith’s TikTok agreed with her that the woman was being unreasonable.

“Wow. I wonder if people know that minding their own business is free,” @shayray121901 commented.

“We need to make Karen phone calls to the police illegal,” @vincecravioto wrote. “They need to cite them tickets if they’re just wasting the cop’s time for something small.”

“U didn’t even do anything wrong,” @angelbaby_107 commented.

The Daily Dot reached out to Smith via Instagram direct message and the Athens, Georgia, police department via email.