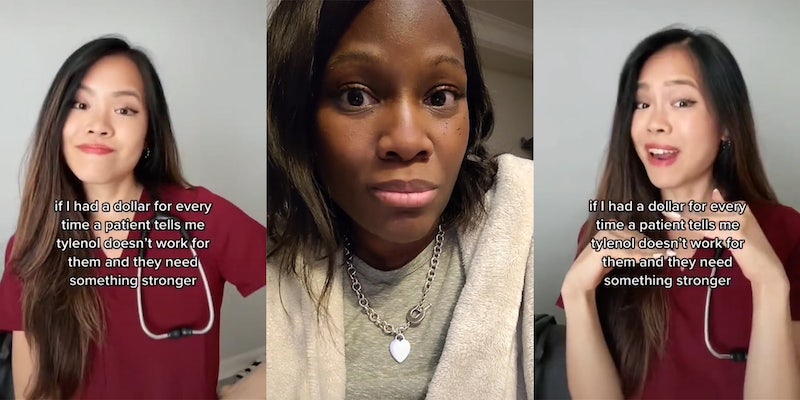 ‘You are the type of provider that I would never want’: Physician blasts patients who say Tylenol doesn’t work

TikTok users are criticizing a doctor for judging patients who say they need painkillers stronger than Tylenol. Users are calling her opinion embarrassing and “ableist”, especially toward people who deal with chronic pain.

Alex Hua, a physician, posted a TikTok recently saying that “if [she] had a dollar for every time a patient tells [her] Tylenol doesn’t work for them and they need something stronger,” she’d have “racks on rack on racks” of money.

Hua’s TikTok and Instagram accounts are now private, and her TikTok is no longer available to view. But she allegedly captioned the TikTok saying that she wouldn’t be anyone’s “Dilaudid daddy,” or prescribe patients narcotics.

TikTok and Twitter users have criticized for Hua making light of any pain that her patients might be experiencing. Most of Hua’s TikTok is shown in a stitch created by Nya (@nurse_nya), a registered nurse.

In her stitch, Nya called Hua’s video “juvenile” and “ableist.”

“You are the type of provider that I would never want. Because your judgment is just abysmal,” Nya says in her TikTok. “You really think that I’m going to let you create my treatment plan? Get the hell outta here.”

Claire Zagorski, a paramedic and graduate research assistant specializing in addiction, tweeted that it’s “pretty embarrassing for a physician to admit publicly that they don’t understand the concept of symptom severity.”

Symptom severity is the concept that different people feel symptoms differently: One person might rate their “pain” two out of 10, while another might rate the same pain as nine out of 10.

“Who in their right mind makes a TikTok to mock people in pain?” user @_bumpus_hound tweeted. “A sociopath?”

Others discussed the consequences of dismissing pain in the medical profession.

“One day we’ll talk about people with periods chronically using aspirin/ibuprofen/naproxen in insane levels for pain [management] for it to not even work 100%, all while damaging organs,” @alanaauston tweeted about Hua’s video. “Tylenol doesn’t even work for menstrual cramps, like be fr [for real].”

The Daily Dot was not able to reach Hua.