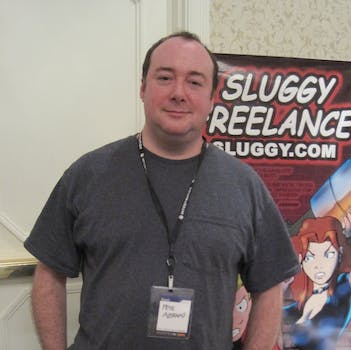 Artist Pete Abrams on the “organic credibility” of Sluggy Freelance

At Intervention, Abrams discussed the history of Sluggy Freelance and the future of webcomics.

A group of geeky friends. A knife-wielding rabbit. A host of alien demons. Beer and rum.

Sluggy Freelance is a webcomic that has it all. And it has been running since well before MegaTokyo, xkcd, and even Penny Arcade made it online.

Started in 1997, the daily comic follows the never-ending adventures and journeys of Torg, Riff, Zoe, Bun-bun, and the various acquaintances they come across. Its readers, which today number in the hundreds of thousands, have tuned in for almost two full decades as the gang has exchanged chloroform candles, angered the Grim Reaper with run-on sentences, and stolen food from an alien prison buffet. The webcomic spawned several print collections, a card game, and a career for its creator, Pete Abrams.

At Intervention, an annual convention celebrating art and Internet culture, in suburban Washington, D.C., Abrams presided at a table overflowing with the print volumes of his life’s work, with colorful Sluggy Freelance banners towered over him. In between chatting with fans and customers, he graciously took time to talk with the Daily Dot about the state of webcomics and the future of the medium.

Daily Dot: Starting out, did you ever see webcomic creation possibly becoming a full-time job?

Actually, I had hoped it’d be that from the very beginning. Right out of the gate, I made Sluggy Freelance a daily strip, and I treated it like it was my job at first.

What I didn’t initially know about were the advantages of an eternal archive system. This lets you tell long stories. In the beginning, a lot of strips were using the Web as a way to become syndicated, so they didn’t do long-running stories, just one-shots and three-panel strips.

DD: What has it been like creating a webcomic for so long?

One of the reasons [Sluggy Freelance] has been fresh is because it isn’t locked into one genre. My audience doesn’t see it as limited to vampires, video games, or one of the other genres out there, so I can literally go anywhere I want.

DD: What tools did you use when you first started out?

I hand-drew the artwork on paper and use Photoshop for the lettering and coloring and all. I think it was Photoshop 5 when I first started. These days, I still use Photoshop, but I draw on card stock and micron.

DD: When was the turning point for webcomics? Are there any particular events that may have caused webcomics to emerge into what they are now?

I didn’t start making a living from it until my third year in. I think [the growth] has definitely been a gradual process. I don’t think there was any one event, but instead just certain characteristics. They were user-friendly and [successful webcomics] were doing it not just to syndicate.

DD: Do you believe that the Internet is currently over-saturated with webcomics?

I don’t think there is such a thing. There are certainly more of them today, but since there’s no “gatekeeper” to the Internet, there isn’t really an amount that could be considered “too much.”

DD: Do you feel that, in webcomics, having a comic isn’t enough anymore? For example, Penny Arcade has blog posts with each strip, its own expo, its own charity, etc.

If you’re giving people something they’re entertained by and you keep them coming back, that’s what matters. When you do this, you’re basically giving people a package, whether it’s just the comic or it’s a strip plus blog post and so on.

DD: What may make webcomic creation and promotion easier as time goes on?

I think the ability to have easily accessible comics and graphic novels on ebooks will be a big help. That’s the future, and I really see it becoming more mainstream once they figure out a way to make the artwork perfect.

Most webcomic creators are a writer/artist combo, or they have very limited “teams.” They can be looser and freer with their art. Plus, they have to rely on storytelling in order to communicate.

DD: What is the best way for a webcomic to stand out, to build a community?

Wow, that’s the magic question. I just do the best quality I can and keep it consistent.

Everyone kind of knows Sluggy Freelance just because it’s been around so long. I didn’t use any fancy ad campaign. I just asked friends to read it, put the word out at cons, that kind of thing. Back when I first started out, I would actually post messages in those old alt.newsgroups. I may have indirectly started the act of spamming! But, word-of-mouth has really been my best tool.

The comic rose based on organic credibility.

Now, I don’t know if that’s still the case today, but I’d like to think it is.