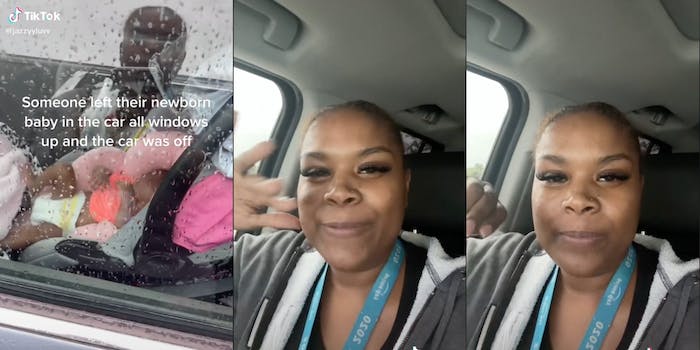 She went to find the parents, and they were quickly reunited.

After finding a newborn baby left alone in a locked car, a woman on TikTok received sharp backlash for not rescuing it.

The woman, known as @jazzyyluvv or Jazmine on TikTok, shared video footage of the baby on TikTok, receiving 2.5 million views and over 5500 comments. Jazmine has over 10,000 followers on the platform.

The TikTok showed a baby squirming in its car seat, which it wasn’t strapped into. Jazmine said the car was off and all the windows were up.

“I am so pissed, I am shaking,” Jazmine said in the video.

But some viewers said that if she was so pissed she should have done something to save the baby—instead of posting a TikTok. To be fair, she captioned the video, “Yes I did go in the store and get the parents.”

“Should’ve called 911,” one user commented. Several others said they would’ve called the police if they’d been in Jazmine’s situation.

“I would have called the police broke the window and got it out,” another viewer commented.

A different person said, “I would have respectfully broke a window.”

In a follow-up TikTok, Jazmine explained why she didn’t break a window to get the baby out, saying that when glass shatters, it can scatter several feet in every direction.

“So no matter what window would have been broken in the car, it would have got on that baby,” she said in the video.

Viewers of the second video came to her defense telling her she did everything she could.

“Why are you wasting your energy on this.. You know you did the right thing!!” one viewer commented.

Another said, “You did the right thing. Don’t let these people get to you.”

The baby was reunited with the family soon after Jazmine went to find the owner of the car. Jazmine did not respond to the Daily Dot’s request for comment.