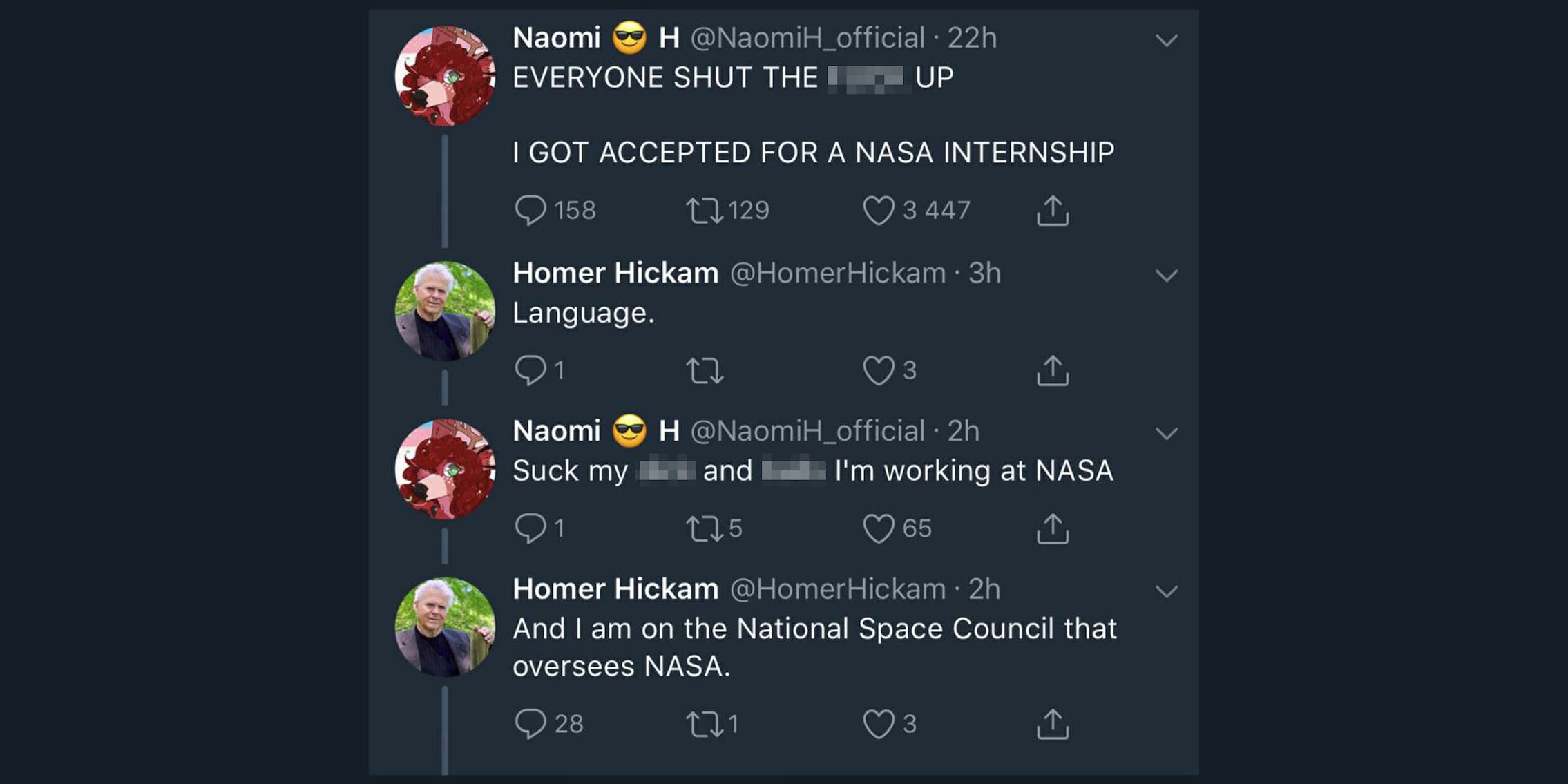 She may get another chance at an internship, though.

An internship at NASA is a highly coveted opportunity for students interested in a career as a scientist or aerospace engineer.

So when a woman found out that she was offered an internship at the government agency responsible for missions like the Curiosity Mars rover, she understandably got very excited and announced the news in a tweet. Nothing out of the ordinary for 2018, right? There’s just one issue: she tweeted about her internship using an expletive.

In the now-deleted tweet, a woman who goes by Naomi H on Twitter wrote, “EVERYONE SHUT THE FUCK UP I GOT ACCEPTED FOR A NASA INTERNSHIP,” NBC reported.

Homer Hickam, a former NASA engineer and a member of the National Space Council User Advisory Group, saw the tweet and replied “Language.” Naomi, likely unaware of who Hickam was, told him to “Suck my d**** and balls.”

Hickam is also the author of Rocket Boys, the book that became the film October Sky.

Multiple news outlets, including NBC, reported that Naomi lost the internship following this tweet exchange. Apparently, the tweets were brought to NASA’s attention after Naomi’s friends used a #NASA hashtag. Hickam gave more details about the incident in a blog post on Tuesday night:

Recently, it was called to my attention on Twitter that someone was being hired by NASA and that they were using the F-word in a tweet about it.

I’m a Vietnam vet and not at all offended by the F-word. However, when I saw NASA and the word used together, it occurred to me that this young person might get in trouble if NASA saw it so I tweeted to her one word: “Language” and intended to leave it at that.

Soon, her friends took umbrage and said a lot of unkind things but long after I was gone as I immediately deleted my comments and blocked all concerned.

Later, I learned she had lost her offer for an internship with NASA. This I had nothing to do with nor could I since I do not hire and fire at the agency or have any say on employment whatsoever.

As it turned out, it was due to the NASA hashtag her friends used that called the agency’s attention to it long after my comments were gone.

He said that Naomi reached out to him to “unnecessary” apologize for the tweets. Hickam went on to say that she “deserves a position in the aerospace industry” and that he is doing what he can to secure her a new spot. “They have told me she may reapply,” he concluded in his blog post.

Usually, people who lose jobs from a social media post do not get that job (or, in this case, an internship) back. But this case may be a rare exception.