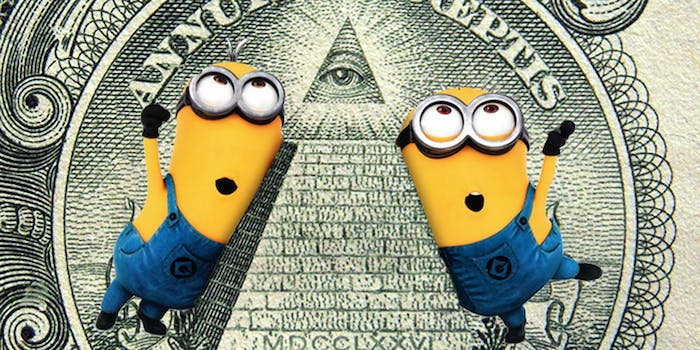 The Minions are Illuminati servants who faked the moon landing, according to the Internet

We are currently suffering from Minion fever. The omnipresence of these creatures, who first debuted in Despicable Me and now have their own film, has reached absurd levels. We want to buy them, fantasize about them, and even be them. But perhaps that’s exactly what they wanted.

But there’s more than just consumerism at play here. A few theorists on the Internet are blowing minds and revealing deep, dark Minion conspiracies. Wake up, sheeple!

The Minions and the Illuminati

In a forum on the website of David Icke, who first theorized that reptilian humanoids called the Babylonian Brotherhood control all of humanity, one forum user recounted her game of “Spot the Illuminati” in Despicable Me. Between the eye of Horus, the film title in “Luciferian black and red,” and Gru getting a loan from the bank (“A reference to the federal reserve, and the banking system’s love of supporting evil”), the whole thing is obviously a metaphor for the coming of the New World Order.

In this case, Minions represent the “drones” too stupid to understand the evil they are supporting. If that wasn’t enough to convince you, did you catch that the movie was made by Illumination Entertainment? ILLUMINATION LIKE THE ILLUMINATI.

Reddit users agree that it’s pretty suspicious, and that the characters “could be predictive programming/subliminal messaging/priming the next generation into being subservient, groupthink.” 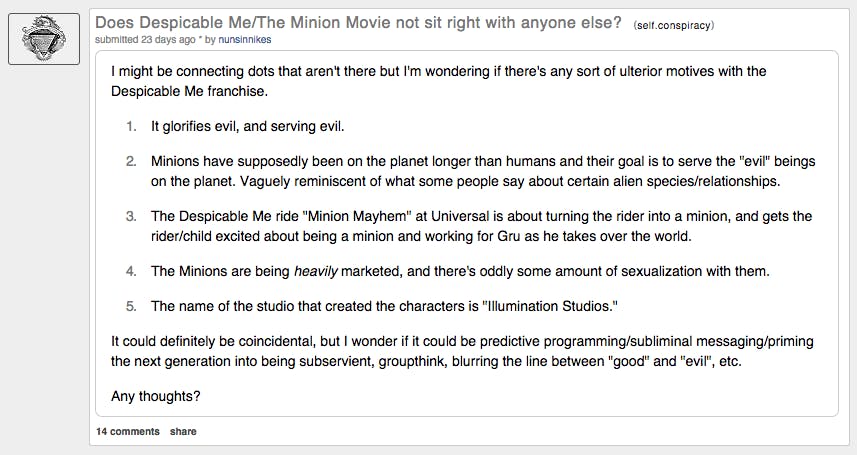 Minions reveal that the moon landing was faked

In the most recent Minions movie, there is—spoiler alert!—a scene in which the three main Minions walk in front of a set made to look like astronauts landing on the moon. Is this the Minions’ way of spreading the message that the moon landing was fake?

“They may just be making a joke about the conspiracy theory,” wrote YouTube user LaalByersGaming. But our eyes are open to the truth.

This past weekend, some Reddit users organized a site-wide blackout to protest mismanagement and antagonism toward users. You know what else happened this past weekend? Minions premiered!

“This is obviously a ploy of the moderators at /r/JustSayNope and Comcast,” wrote user DumblrBot. “Open your eyes everyone, Ellen Pao is tied with Comcast and is using /r/JustSayNope Blackout period to force us to view more Minions.”

Okay, let’s go back into some Minion history. In Despicable Me, Gru is seen with blueprints for the Minions—meaning they were clearly something he, or someone, designed. But in Minions, the franchise’s creators have rendered that explanation non-canon and decided that the creatures have been around since the dawn of time—and that they exist solely to serve evil masters.

The obvious conclusion to draw here is that, if Minions wanted to serve the evilest people, naturally they would have served Hitler. Minions sneakily gets past this by saying the creatures lived in Antarctica from the 1920s through 1968. However, they never address what happened in the years between Despicable Me (2010) and Despicable Me 2 (2013). 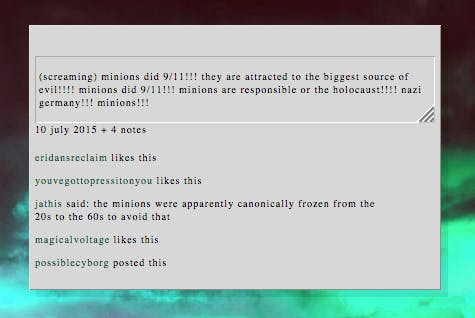 Minions and the Antichrist

The Minions may exist solely to tempt children into a world of sin and evil.

“Have you ever heard about ‘the Devil and his minions?’ It’s not a mere coincidence that the word “minions” was used,” writes David Stewart on Jesusisprecious.org. “The message taught by the minions characters are really bad for children. Look at the promotion poster to the above right (Gru and his minions), which reads at the top: ‘When the World Needed a Hero, They Called a Villain.’ Talk about the Antichrist.”

Stewart theorizes that the Illuminati are also at work here, specifically in preparing children to conflate evil and good and to receive the Antichrist.

“Look at the disturbing image to the left of a group of minions, many of whom only have ONE EYE,” he writes. “The film series is promoting the All Seeing Eye—one of the occult symbols of the Ancient Mystery Religion.”

Or they could just be mockeries of the average American pill-head working man.

Is this all the product of the Jews who run Hollywood? Henry Makow suggests that, because of Kabbalah Judaism, “Hollywood deserves much of the credit. This movie demonstrates how, in a satanic cult, evil is made to appear good, and members are corrupted and sickened, and thus controlled and exploited.”

Whatever the explanation, we may be too late to save the children. “On Wednesday evening catechism a girl came up to me to show me her drawing,” Father Peter Carota wrote on his blog. “It had a cross and a minion standing next to it.  She likes crosses and minions. A few of the little boys strongly said they like the minions no matter what I said about them being bad.”

But since we’re now minion experts, we have to wonder…could they actually be agents of good?

Think about it. Every time they serve a master they wind up doing more harm than good. Perhaps they’re double agents of God, serving evil in order to stop it.