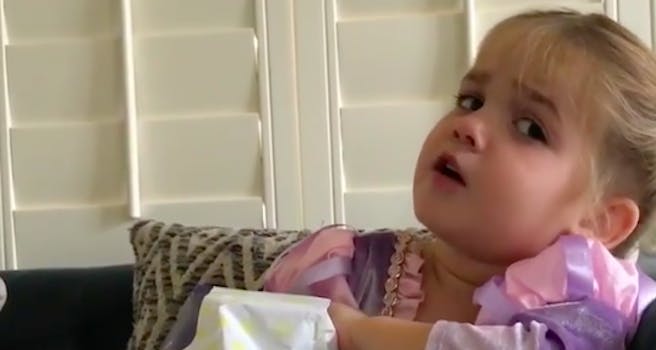 An easy joke can make any parent a YouTube star, and we're tired of it.

Meet Mila, the internet’s newest sassy toddler. She apparently calls her teachers “shady” and uses the word “shook” in the right context. She sighs, rolls her eyes, and dishes her latest personal drama while eating a bag of popcorn like a real-life, pint-sized reactionary emoji. More than 2 million people have viewed a video in which Mila lets us know she is not impressed with preschool because, duh, she is ready for law school.

Mila already has a YouTube channel. Oh wait, did I say she has a YouTube channel? I meant her mother, Katie Stauffer, posts videos of her and her twin sister Emma saying “insane” things on her YouTube channel. The twins can’t post their videos because they are all of 2 years old (though I’d guess they are closer to 3 since my 2-year-old lisps through broken sentences and is only so-so at comedic timing). But what they can do is say the blunt things children are prone to saying, and act out the warring dynamics that siblings are prone to act out.

Here is Mila more cynical than a goth about Disneyland (which is I guess not that cynical since goths love Disneyland):

Here is Mila stressed out and reading trash mags, you know, like “all of us”:

Mila is no doubt adorable and charming and a potential star in her own right. And parents should not be ashamed to show off how funny or unfunny their kids are. But let’s call this what this is: parental virality by proxy—a parent using their kids to fulfill their desire to be viral.

Is this the greatest travesty to be worked up about right now? Hell no. Is Stauffer the first person to do this? Hardly (which is part of the problem). Should we really knock her hustle if this lands her some influencer cash or a TLC show? Probably not. But is what’s most insulting about these types of kids videos their too-easy, transparent, and manipulative humor? Yes, yes, yes.

Every parent knows that kids say hilarious, fucked-up shit, and we encourage it because who doesn’t love to laugh? But these videos are not raw cuts. They are sliced and edited together, a best-of reel, with Mom likely prompting Mila to use buzzwords people love to hate like “triggered.” The formula for the easiest laugh in the world is to put blunt—and often offensive and uncreative—language that an adult couldn’t get away with in a kid’s mouth. Tiny, doe-eyed person in pigtails is “sassy,” “full of ‘tude,” or a “little diva.” Let’s not even go there with what the adult version of that would be called, but know that it would indeed show how messed up our culture’s views of women are.

In other words, these are videos that were made with the hope of going viral. And that obviousness makes it unfunny to me.

But humor is subjective and if millions of people are cracking up about Stauffer’s videos, then it speaks to the fact that I am indeed a curmudgeon. But it reminds me what a former colleague once said about viral animal videos: Dogs and cats are expected—show me an iguana. I’m waiting for the iguana of viral kids videos, something less posed and more unusual. Or at least something that could pass as genuine.