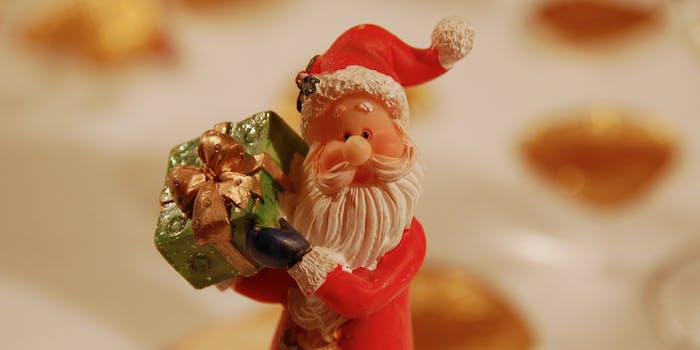 Photo via Aurelien Jena/Flickr (CC BY 2.0)

A 10-year-old's handwritten note has gone viral due to its emoji-strewn rage.

Don’t mess with little kids when it comes to Santa Claus.

That’s what mom Nicki Adams, of Maryland, learned when she found a note from her daughter Belle on Dec. 10. Angry after a Santa truth talk, Belle slid four separate handwritten notes under the door, each more scathing than the last.

But it wasn’t until Adams saw the last of the four notes that she and her husband “lost our ever loving shit,” as she described in a Facebook post that has since been shared over 17,000 times.

“You have no idea what you just did,” read the angry note from Belle. “I really tried to believe. Everyone told me it’s your parents. I can’t believe you anymore. Is the Easter Bunny real? How about the Tooth Fairy, huh? You just ruined a 10-year-old child’s LIFE thanks.”

But the last segment of the note included a hand-drawn emoji and a hashtag: #middlefingeremoji. This kid has been spending a lot of time online.

Adams described getting the note in pieces: At first she was concerned, then she was ROFLing her ass off.

“We went from omg what did we do,” wrote Adams in a comment on the post, “to omg that’s so hilarious that I can’t breathe!”

Adams also added in a comment that Belle was “only angry for about an hour,” and later was “glad to be on our team.”

Belle isn’t alone in her emoji-fueled anger. A recent study found 13 percent of parents reporting that their children discovered Santa wasn’t real via the Internet, primarily by Googling.

IRL Santa truthers have been popping up around the country in the days before Christmas too, with parents in a Boston suburb enraged at a substitute teacher who announced to a class of crying kids that Santa isn’t real.

While most of the children went home in tears, asking their parents about the Santa comments, one mom reported that her son had critical words for the teacher.

“My son said that she was really mean,” a Stoneham, Massachusetts, mom told Boston’s WFXT. “That he doesn’t understand why she would say that, and that she’s on the naughty list.”

Photo via Aurelien Jena/Flickr (CC BY 2.0)