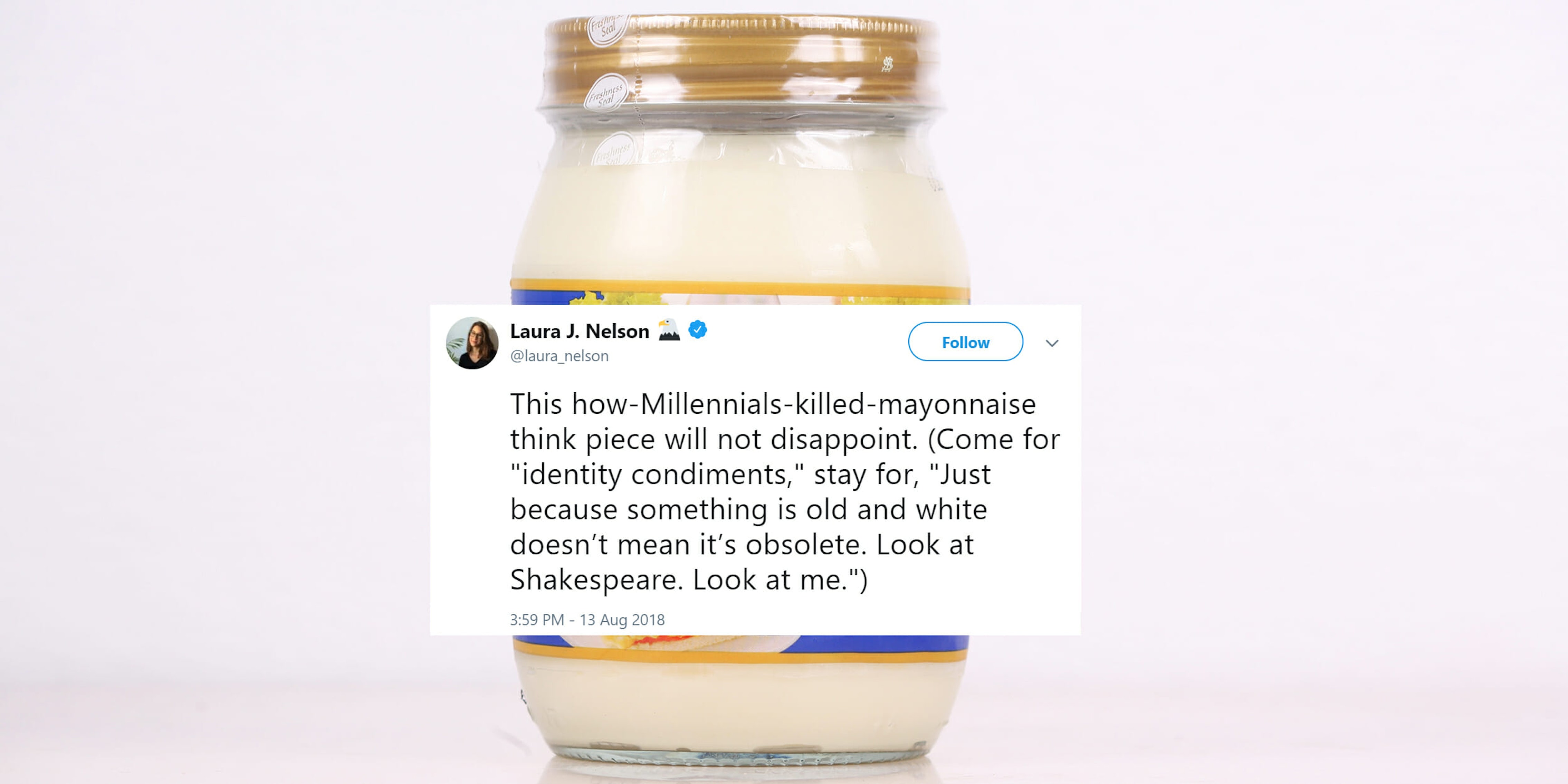 Keep mayo’s name out of your screed about white obsoletion

Millennials did not kill mayonnaise—but boomers are scared their relevancy is dead.

Let me come clean: I am not millennial. I cannot speak for the entire swath of people born in the ‘80s and ‘90s and say mayonnaise is or isn’t a scourge to a generation.

What I am, though, is a mayonnaise enthusiast: Asparagus, fries, artichokes, they all get a dip (usually mixed with soy sauce); I only eat salads if mayo is the main ingredient; the secret to my broiled salmon is a nice lathering of Hellmann’s. For this to happen, it means I am still able to buy mayo at any supermarket or bodega or 24-hour drugstore. There are mayo to-go packets at nearly every sandwich place I’ve ever patroned, and I’ve never been to a restaurant that couldn’t accommodate my ask for a side of mayo. Hell, there was even this dumb thing around the corner from my apartment years ago. Mayonnaise, my friends, is not going extinct. Millennials have not killed mayonnaise.

OMG I did not know mayonnaise was alive I'm freaking out pic.twitter.com/99JyUhkuek

There are many reasons to be annoyed at this Philadelphia magazine article claiming the death of mayo at the hands of millennials—like, can we please stop with the “millennials brought the annihilation of silly thing boomers loved” thing?—but what is the greatest travesty of all (besides the editor who let this piece run as is) is that writer Sandy Hingston has dragged mayo as a stand-in for her fears that she is “obsolete” as a white person.

“Just because something is old and white doesn’t mean it’s obsolete,” she writes. “Look at Shakespeare. Look at me.”

Ouch. That is the sound of reaching for one last grasp at relevancy. It is a wheeze of agony over losing the control, the privilege, you took for granted your entire life. She’s even willing to throw her feminist daughter under the bus to prove she is the one who has been wronged here in the “rise of identity condiments”; meanwhile, the youths are just goofy xenophiles.

“My son Jake, who’s 25, eats mayo. He’s a practical young man who works in computers and adores macaroni salad. He’s a good son,” she writes. “I also have a daughter. She was a women’s and gender studies major in college. Naturally, she loathes mayonnaise.”

Sure, that dig could be a joke that didn’t exactly land, probably because the entire piece is laced in defensiveness. But nah. She really does see her daughter as one of those disappointing millennials, who “for them, mayo quite literally whitewashed America’s immigrants into eating dull food. And newer generations are refusing to meekly fall in line with a culinary heritage that never was theirs. Instead, they’re gobbling up kefir and ajvar and chimichurri and gochujang again.”

Yes, lord forbid the young white people branch out to other cultures and not think their own is superior. This is an affront to Hingston.

“And it’s obvious to me that this condimental divide can be traced to young folks’ rejection of what they sneeringly consider a boring white food,” she writes, as if having your own opinion and questioning what your parents impressed upon you are bad things.

In case you may think Hingston is out of touch, fret not. You can’t pull one over on the woman who thinks millennials didn’t realize aioli, a thing no one talks about anymore, was mayonnaise: “That aioli you’re all so fond of? I hate to break it to you, but that’s just mayonnaise,” she writes.

In other words, there are many reasons to dunk on Hingston and this article, even though she probably saw it as a light-hearted humor piece that her boomer pals would get a kick out of (her editor, meanwhile, probably saw success in future hate clicks). And so the internet has indeed dunked on it. Hard.

I have killed
the mayonnaise
that was in
the icebox

and which
you were saving
for some
unfathomable reason

Forgive me
It was so cold
and so grosshttps://t.co/9fOHooW9Np

It's 2018, and we're all supposed to have strong feelings about mayonnaise now.

I've been offline a few hours, is it okay for Gen X to resurrect mayonnaise now? Because it's tasty and you really can't make a good deviled egg without it.

We could almost write this off as another innocuous avocado toast screed, but the unease with which Hingston writes about embracing other cultures speaks volumes about the race relations our country faces and has always faced. You don’t have to replace “mayonnaise” with “white people” and “condiment” with “race” in the passage below to get the metaphor.

“The all-American condiment didn’t have to be mayonnaise. It could have been ketchup or mustard. Hell, it could have been horseradish, but it wasn’t. It’s not mayo’s fault that it’s been so successful — that it glimpsed a condiment breach and jiggled right on through. As Boston chef Scott Jones told Ari LeVaux, ‘The magic that sets mayonnaise above Coke and Heinz is that mayo is a perfect flavor carrier.’ It just makes everything better.”

If I could wish one thing to come out of the responses to this piece—besides retorts like this—it is for Hingston and any other seemingly lovable curmudgeons to sit back and listen to these criticisms. There is something for our white elders to learn here about the decades-long sway they took for granted, about the fact that progress is made through the passage of time, and that, in all of history, never have we looked to the generation after us and thought, “Their ideas did not evolve from ours.”

The “get off my lawn” schtick is tired but also frustrating: Complaining about the youths without trying to understand what they—the people living and working and building families in the current culture—are saying and most concerned with is just whining. Save it for a picnic of your peers where you can eat all the potato salad you want. It’s OK to learn from people who aren’t grasping at every last ounce of power by clinging to the ease of their whiteness.

And if you can’t do that, at least laugh along with them and pretend you’re trying. Because I’m sorry: Whiteness, like mayo, has no chance of going extinct. It’s time to take up a new cause.