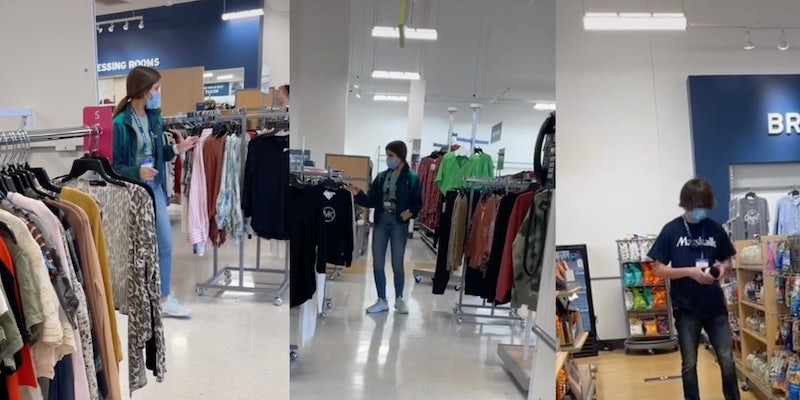 A Black woman accused Marshalls employees of following her and her friends around a store in Big Rapids, Michigan, through a series of videos. The white employees can be seen in the clips aimlessly walking in the vicinity of different sections of the store the TikToker and her friends are in.

“I’ve heard stories about minorities being followed around in stores and I’ve seen it in movies but you don’t really know how it feels until it happens to you and it sucks,” the TikToker, Katie Powell, told the Daily Dot on Thursday about her experience.

Powell made the allegations in a video on Monday, and tagged the store in the caption: “@marshalls so do y’all follow all your black customers around or just us????”

Her video went viral, garnering over 630,000 views in just two days and a slew of comments from people saying that the workers made “it so obvious” and calling their actions “sus.”

In a series of followup TikTok videos, Powell claimed she and her friends went to a Marshalls location that had recently opened. From the shoes and household items sections to the hair products section, Powell said the group kept noticing the same worker in every section they went to.

“She wasn’t even looking at [the products], she was looking at us,” Powell said in one of the numerous followup videos.

In another followup video, she explained that they were simply picking up a few items to purchase. “We were just holding (the items) in our hands. We didn’t realize we’re gonna buy that (much) stuff, so we went and got a cart and put everything in the cart,” she said.

“She was just walking around, picking up product, putting it back down and just staring at us,” she said of the worker.

At first, she said they didn’t think much of it because they figured she was just a store employee doing her job.

The store was full of people, Powell said, so it didn’t make sense that only they were being followed.

“I didn’t want to make this into a racial issue, however we were the only Black people in the store,” she said in another video.

Powell told the Daily Dot that they were then followed by a male employee who was “eyeing” her friend as she was checking out a candle.

She said they were followed by the workers, even after they made their purchases.

“We went to pay for our things and then I noticed, as we were leaving, the male still following us to the door,” she said. “We walked out of the door, and I turned around to look at the man and he was standing at the door as we walked out and quickly walked away.”

Powell tagged Marshalls in a tweet on Monday, and Marshalls responded, asking her to message it her information so that they could contact her.

As of Thursday, Powell has not heard from the store, she told the Daily Dot.

“I honestly just really would like a formal apology. Nothing major,” she said. ”I want them to stop living by the stereotype of ‘all black people steal’—I’ve never stolen anything a day in my life. I want them to make a change and stop seeing black people as ‘thugs and thief’s’ because it’s not like that at all.”

The Daily Dot has reached out to Marshalls.