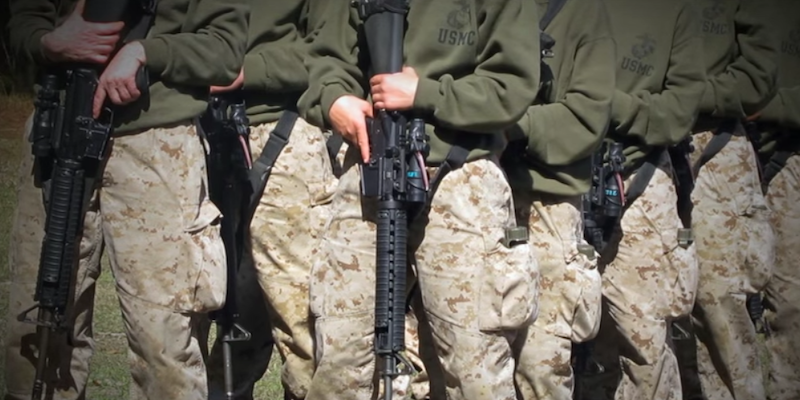 There's no telling how far this investigation will go.

Previously, the investigation had centered specifically around the distribution of violating images of women, but now it’s reportedly spreading out to similar images of male service members naked or engaged in sexual activities, with no indication that consent was given for the images to be uploaded.

The scandal has underscored concerns about proper respect for sexual consent and gender equality within the Facebook group it spawned from, and consequently the broader military, as well. The lurid activities of the Marines United Facebook group, a private group, were reportedly not exposed or addressed for months, because the only way the information could get out was if an active member of the group reported it.

In other words, if everyone kept a unified front in favor of posting such violating images, it might not ever have been discovered. The first crack in the wall reportedly came last September, when a veteran named John Albert joined the group and was galled by what he saw.

“I was really insulted,” Albert, himself a former Marine, told BuzzFeed. “I thought it had no place inside a group of people with the label of the Marines.”

Senator Kirsten Gillibrand of New York has been at the forefront of this issue within the U.S. Congress, and she told USA Today that “the scandal is out of control.”

… The Department of Defense needs to get a handle on it immediately. Congress needs to demand accountability from the chain of command as to how so many service members, both women and men now, could be so easily exploited. Commanders have told us for decades that they can handle these issues, clearly they cannot, and Congress should step up and do its job and bring professionalism and accountability to the military justice system that has ignored predators for far too long.

Speaking to the Daily Beast earlier this week, Marines United spokesperson Marshall Chiles claimed the situation demonstrated the kinds of problems that arise “when you integrate women.” It was an explanation that drew an immense amount of criticism, condemnation, and derision throughout social media, and looks even sillier now that the scandal has widened to encompass images of male service members. This is nonetheless a frustratingly common attitude—no less than the commander in chief suggested the same thing about the rash of unreported sexual assaults in the military back when he was still just a presidential candidate.

26,000 unreported sexual assults in the military-only 238 convictions. What did these geniuses expect when they put men & women together?

Whether this latest development will be used to question whether men should be allowed in the armed forces remains to be seen.