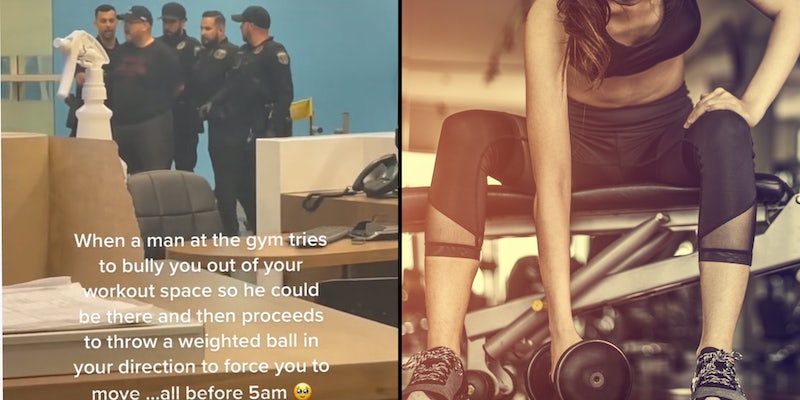 ‘I finally understand the girls who feel uncomfortable working out at the gym’: Woman says man threw a weighted ball at her at gym to get her to move

'When a man at the gym tries to bully you out of your workout space.'

A woman says a man threw a weighted ball at her when she was at the gym to get her to move.

Lexi Moore (@armanilex) posted a TikTok about the situation on April 27. She wrote in the video’s overlay text that she felt the man was trying to “bully” her out of the space she was using to work out and threw a weighted ball in her direction to “force” her to move—”all before 5am”

“Now I finally understand the girls who feel uncomfortable working out at the gym,” Moore wrote in the TikTok’s caption. “Especially when no one comes to help you and just watches.” She added that eventually the “front desk attendant” intervened.

In a follow-up TikTok, Moore says the incident happened in an Eos Fitness.

@armanilex Now I finally understand the girls who feel uncomfortable working out at the gym, especially when no one comes to help you and just watches ! Front desk attendant ended up intervening . #fypシ #eosfitness #gymtiktok #sharingiscaring ♬ I Like – Guy

In a comment on the video, Moore says the man also pushed her equipment out of his way and didn’t listen to the front desk attendant when they asked him to leave.

Moore says that a manager from Eos got in contact with her and told her that they banned the man from her gym and were working on making sure he is not allowed into other gyms in the area in a follow-up TikTok.

“[The manager] did reassure me that she wants me to come back,” Moore says.

TikTok user @drproteinman commented on Moore’s original video saying that he goes to her gym and that the man who harassed her has caused issues before.

A survey from Fit Rated found that over 70% of women have had an interaction at a gym that made them feel “uncomfortable.”

“Some people have a genuine fear of spending time at the gym,” according to Fit Rated, because of how they are treated by others working out at the same time as them.

Commenters on both of Moore’s TikToks expressed concerns for her safety, even though the police have already been involved.

“Make sure you have someone walk you to your car when you leave the gym,” @jumping_jaxx wrote. “He could be in the parking lot waiting for you.”

“Just find a new gym cause who knows who else could come after you just because of this particular situation,” @meatgobblersteph commented.

Update 7:11am CT, April 29: When reach for comment, Eos Fitness told the Daily Dot in a statement that “EōS Fitness is a place for people to focus on their individual health and wellness. We do not allow this type of behavior in our gyms and we can confirm this member’s membership was immediately revoked following this incident. We want to reassure Lexi, and all of our members that their safety and wellbeing is our top priority.”

The Daily Dot has reached out to Moore in a TikTok comment.