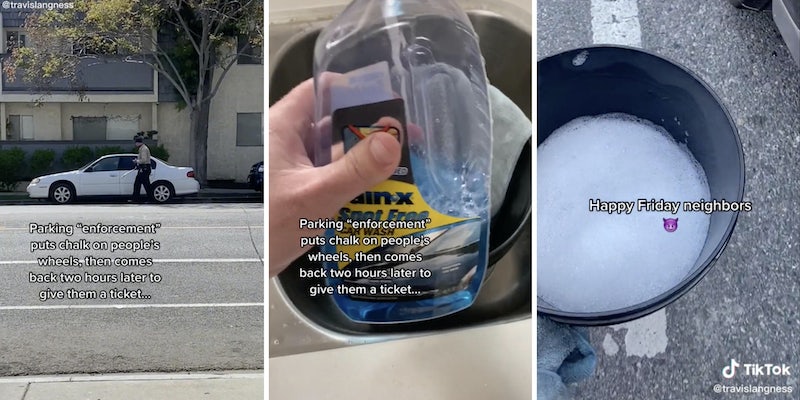 ‘If the penalty for a crime is a fine, then that law only exists for the lower class.’

In a now-viral TikTok, a man says he erases the chalk marks left by parking enforcement to help his neighbors avoid a parking ticket.

The clip, posted by Travis Langness (@travislangness) on April 1, shows a parking enforcement officer walking down the street and marking cars’ tires with chalk. Text overlay on the video reads, “Parking enforcement puts chalk on people’s wheels, then comes back two hours later to give them a ticket.”

The video then shows Langness mixing up a bucket of soapy water and cleaning the chalk marks off of the tires. The text overlay reads, “Happy Friday neighbors.”

The clip is captioned “be kind to your neighbors” and has over 19.4 million views and 2.2 million likes.

“Not all heroes wear capes!! Protect this person at all costs! They the real MVP!!” one user wrote.

“I like to brush off snow for others sometimes but this is better. Be kind to your neighbors, accidents happen to everyone,” another said.

A few users bashed Langness for disrupting the parking authority’s job, but he clapped back. “If the penalty for a crime is a fine, then that law only exists for the lower class,” he wrote in a comment that received over 101,000 likes.

Other commenters noted that marking vehicles with chalk was deemed unconstitutional by the Supreme Court in 2019, as it violates the Fourth Amendment which protects against unreasonable searches or seizures.

“Pretty sure what the parking enforcement is doing is illegal. The mark he puts is like a tracker and unless he has a warrant it’s illegal and suable,” one user said.

“Had an attorney tell me if they touch your tire… a chalk mark… it’s vandalism,” another wrote.

Langness did not respond to the Daily Dot’s request for comment.