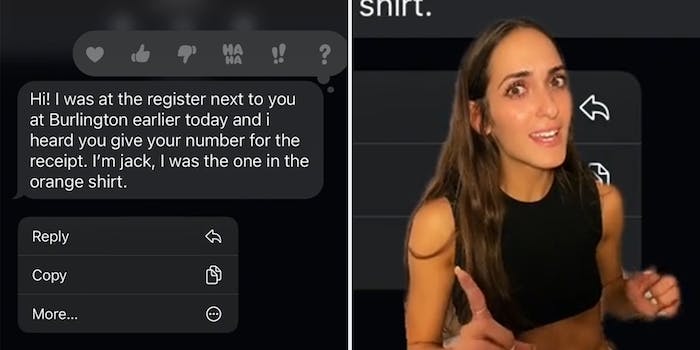 ‘I heard you give your number for the receipt’: Man gets woman’s number in creepy way at Burlington

‘I was at the register next to you at Burlington earlier today.’

A TikToker who was just trying to shop at Burlington was contacted by someone trying to shoot his shot—in maybe the creepiest of ways.

The viral TikTok video, posted by @allyh0pe, registered more than 420,000 views in two days on the platform. As she noted in a comment accompanying the video, “Not only does Burlington have coats, they also have creeps.”

The video shows her doing a bit of a performative dance to the emotionally-fraught “What does it mean?” section of Miley Cyrus’ “Twinkle Song.”

What’s in the background is what’s key. It appears to be a screenshot of a text she received from an admirer reaching out. It cheerfully starts, “Hi! I was at the register next to you at Burlington earlier today.” It then moves into a creepier place with, “I heard you give your number for the receipt.”

He then seemingly proceeded, as if it was OK to eavesdrop, gather her number, and text her out of the blue, with, “I’m Jack, I was the one in the orange shirt.”

One remarked that this is the exact scenario she fears when she says her number out loud at a cash register, calling it, “The reason I hate places asking for my number. I’m always paranoid that someone would do this AND THEY DID.” That well-wisher added, “Stay safe, girl.”

Another remarked, regarding his comment about being in the orange shirt, “As if we’re paying attention to total strangers when we’re shopping and would even remember.” (The creator agreed wholeheartedly with that.)

However, not everyone was mad that the shopper was trying to connect.

As one said, “Can I tell you the most toxic thing about me,” before proceeding to say, “Depending on how he looked, I might find this cute.”

The creator responded wth an emphatic “LMFAO,” before adding, “I probably would too if I wasn’t emotionally unavailable right now.”