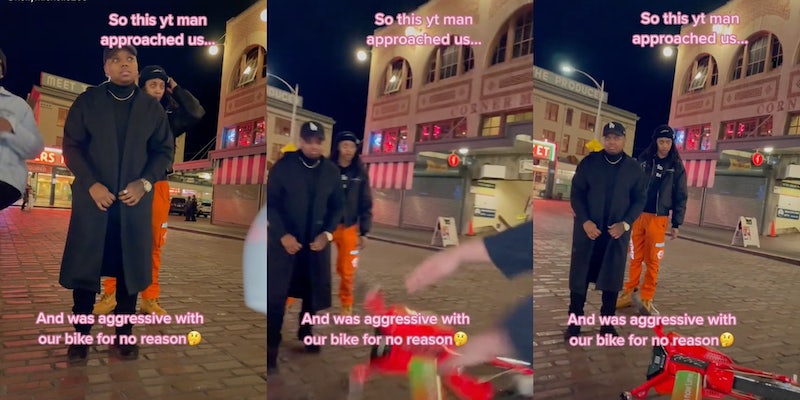 'He scampered off down the street.'

Viral TikTok footage shows four women standby in confusion as a male Karen shoves their bike over for no reason in Seattle.

TikToker Holly Michelle, known as @hollymichelle206 on the platform, posted the footage Monday, saying “So this yt man approached us and was aggressive with our bike for no reason.” The TikTok video received 1.3 million views and almost 300,000 likes as of Wednesday.

The women can be seen in the video dancing, seemingly to record a TikTok dance in front of their phone, which was propped up against the bike. The man approached them for no apparent reason and asked them to pick up the phone “real quick.”

Then he shoved the bike over and walked away.

Viewers collectively agreed on two things: the man was a Karen and the women’s reaction was priceless. After the man walked off, the women looked shocked but also confused.

“I’m sorry the look on y’all face has me screaming,” one viewer commented.

Another viewer wrote, “The collective confusion.”

Others said the unwarranted action would have prompted them to retaliate.

“And that’s when I would have picked up that bike and threw it at his a.z.z.,” someone said.

Another angry viewer commented, “Sorry this would have INSTANTLY activated the FuckEmUp in me! Ain’t no way he would’ve walked away without feeling my wrath!”

Several viewers were confused why the man asked the women to move the phone first instead of fully committing to being rude.

“So confused he was half committed to the hate crime wth was that?” one person asked.

In another video clip, Michelle said the group “laughed it off in confusion” and continued with their night.

Holly Michelle did not immediately respond to the Daily Dot’s request for comment.