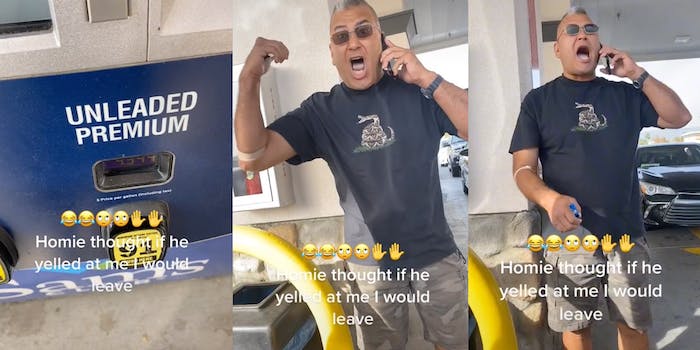 ‘Got all worked up for no reason’: Male Karen screams at TikToker, falsely accuses her of cutting line at Sam’s Club gas station

An aggressive verbal altercation at a gas station has TikTok viewers split.

Denise Blanco (@deniseblanco820) shared video of an incident between her and a screaming man wearing a t-shirt featuring the “Don’t tread on me” snake.

When the video starts, Denise had clearly been dealing with the man for a bit. He’s holding his phone up to his ear and demanding that she leave the gas pump and “go back in line,” insinuating that he believed she jumped ahead.

She tells him he doesn’t need to talk to her, and the man loses it, screaming at the top of his lungs: “You need to go back in line! Do you understand?! Get in line!”

The man continues to cause a scene as Denise makes it clear that she’s not going to leave until she fills her car with gas.

“I have my four kids in the car, so I need you to be quiet and leave me alone,” she explains, even as the man keeps shouting over her.

The video ends with her saying she’s going to call the police.

Without more context, some viewers were quick to comment that Denise was in the wrong if she cut the line.

“Sounds like you don’t know how a line works tbh,” suggested @brendanbong.

“Sounds like she cut. He walked from another line to yell at her? Nope,” @forsurecancelled added. “This foo was probably next and she swooped in.”

But others said his behavior was unacceptable regardless of the circumstances.

“Idc what she did, a grown man yelling at a woman like this over a supposed place in line is UNACCEPTABLE,” wrote @alexishl7. “He wouldn’t be yelling like this at a man.”

“Powerless men feel the need to yell. It makes them feel superior,” @rubymendes4 added. “You showed so much more class.”

In a later video, Denise explains that she pulled up to a gas station at Sam’s Club and went to one of the shorter lines. Two cars ahead of her finished getting gas and pulled away, so she pulled up to the farthest one so that someone else could pull into the pump behind her.

That’s when she says the man, who had already gotten his gas, approached her to yell at her and claim that she had cut the line—so she started filming.

Afterwards, Denise says the man tried to complain to the manager but it amounted to nothing. So instead, he sat in his car and watched her fill her tank, refusing to leave the parking lot until she had finished and left herself.

“And what did that get him? A headache?” she asked. “Like, I don’t understand.”

The Daily Dot has reached out to @deniseblanco820.