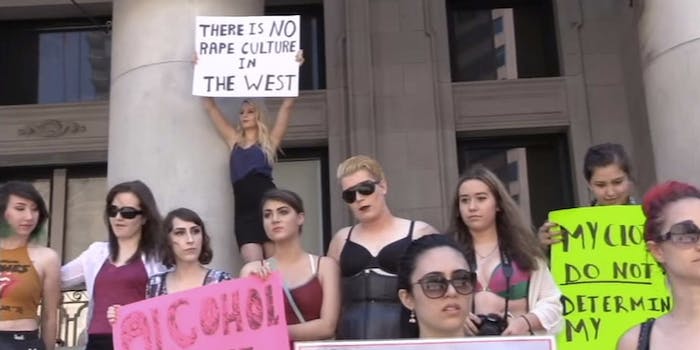 Lauren Southern is running for public office, finishing college, and trolling feminists, all at the same time.

Lauren Southern is a political science major at the University of the Fraser Valley in British Columbia. She’s running for public office as a Libertarian. And she’s also something of an Internet sensation.

The Canadian first went viral back in April, when she posted a video explaining why she’s not a feminist. Now, she’s back in the public eye with a video attacking “rape culture,” in which she reported from an anti-rape SlutWalk in British Columbia.

Shot for the conservative Canadian media platform The Rebel, the video shows Southern scurrying down the street to interview scantily clad SlutWalkers and trying to catch them off guard by interrogating them about rape statistics. In the middle of the video, she suddenly transitions from reporter to protester, holding up a sign declaring: “There is no rape culture in the west.”

Just last week, Southern posted a video on the Rebel called “The falsely accused are the real victims,” in which she excoriates women for taking down “innocent men” while referencing the high-profile rape stories at Columbia University and University of Virginia.

While Southern has been widely praised by conservatives, she’s also been called all sorts of names on social media. There’s even a Change.org petition started by attendees of the SlutWalk to have her removed as a Libertarian candidate for office.

“Ms Southern held her microphone in a victim’s face while a woman was sharing her experience of sexual violence and marginalization, drawing attention to herself and away from the speaker,” the petition reads.

“She screamed over the women who were speaking, essentially attempting to silence their voices. She marched up behind the speakers that were sharing and held up a sign that said ‘There is no rape culture in the West.’ While we support Ms Southern’s right to express her political views, we take issue with the methods she used that day to get her message across.

“Overall, men have been getting the short end of the stick, and I think it’s because of feminism.”

The petition continues: “She attempted to silence a group of Canadians who gathered together to share their stories, give sexual assault survivors a platform where their voices could be heard, and raise awareness about how the judicial system and the culture of victim-blaming and slut-shaming undermines survivors.”

In a phone conversation with the Daily Dot, Southern said it’s not surprising that she’s drawn the ire of feminists who believe society has yet to achieve equality for women.

“I think systematically men are less privileged for sure,” she said.

“Overall, men have been getting the short end of the stick, and I think it’s because of feminism. If you only try to push equality for one gender, you’re going to get a disparity, and that’s what’s happening.”

Southern rejects the argument that women have historically been oppressed and disenfranchised by society.

“How long can you hold onto these past wrongs that have been done?” She asked. “I don’t think you can hold onto them for so long. I think women need to empower themselves instead of asking for handouts.”

Although Southern’s extreme views have garnered her praise and attention as one of the emerging leaders of the libertarian movement, it’s important to remember that she’s young. Very young. She wouldn’t confirm her exact age to me, but she said she’s a second-year college student and confirmed that she was “somewhere around 20.”

“I think women need to empower themselves instead of asking for handouts.”

Southern has been accused by participants in the SlutWalk of using footage and interviews of minors without their consent, as well as forcefully disrupting the speakers at the event. She took to YouTube on Thursday night to defend herself, appearing emotional and distraught in a short vlog post.

But by the time we spoke Friday morning, she sounded back to normal, filling us in on her plans for the future and who she considers her political female role models.

She pointed to Libertarian vlogger Julie Borowski, who recently posted a video in which she dressed up in what appeared to be an SS officer uniform and spoke in a fake German accent in an attempt to mock other libertarians.

Southern also said she had great admiration for Christina Hoff Sommers, known online as “The Factual Feminist.” Sommers is best known outside the conservative community as a woman who came to the defense of Gamergate, calling it “a voice for moderation in today’s fevered debates over sex and gender.” It appears the fondness is mutual.

Conservatives have had a historically complicated relationship with feminism. On Thursday, Carly Fiorina, the only female Republican candidate running for President of the United States in 2016, made a speech calling for the GOP to “reclaim” the term:

“Over the years, feminism has devolved into a left-leaning political ideology where women are pitted against men and used as a political weapon to win elections … A feminist is a woman who lives the life she chooses.”

By Fiorina’s definition, Southern is by all accounts a feminist. But by all accounts, it seems, she’s just a young person among many, struggling to find her voice.