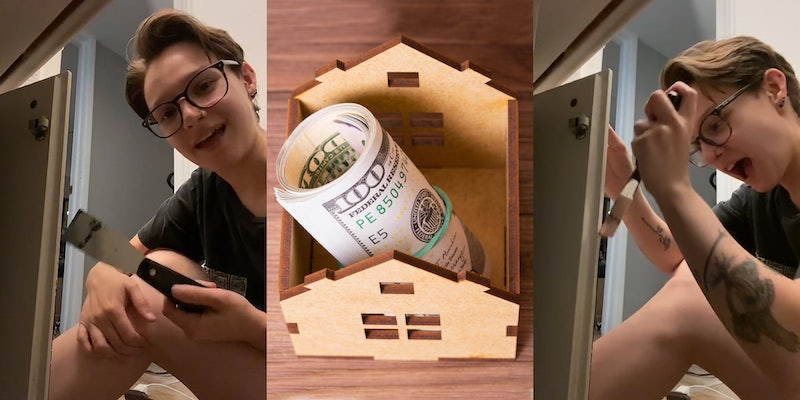 ‘They always find some tiny bs so I just give up’: Tenant calls out landlords for using ‘anything’ to keep the security deposit

'I'm literally doing this because they will take my deposit if I don't.'

Landlords have many opportunities to include provisions to retain security deposits, and one TikToker is using their platform to call out the practice.

In their video that has more than 200,000 views, user Kay (@kay.1331) shares their frustration with the small things they must do to prevent their landlord from keeping their security deposit.

“The reality of renting apartments is fucking ridiculous,” they say in the video. “I’m telling you right now. I used paintable wallpaper, and when I took it off, there’s just a little line of black paint around the edge. And so now, because I know that they would take my deposit for this, I’m scraping off the black layer of paint.”

The TikToker notes that their tactic is working without destroying the white paint underneath. However, they claim that they must take the extra effort to remove the small bit of paint if they want to receive their deposit back.

“I’m literally doing this because they will take my deposit if I don’t,” they continue. “Over a little bit of paint. Anybody who’s ever rented an apartment is fully aware that they can take your deposit for quite literally anything.”

Some commenters shared their own frustrations with landlords keeping security deposits.

“I’ve never gotten a deposit back, they always find some tiny bs so I just give up and not waste the time trying,” one commenter wrote.

“One of my mates paid $700 for a cleaning company, and the real estate said it wasn’t clean enough,” another commenter wrote.

“My landlord took my deposit bc he said I lost the drain catch in the kitchen sink!” a commenter wrote. “The $2 part that literally wasn’t there when I moved in!”

Others shared their strategies for ensuring that their landlord could not pin anything wrong with their apartments on them at move-out.

“I took a million pictures and a full video of my whole apartment when I moved in, in case anything happens I can prove what was there when we moved in,” one commenter wrote.

“Everywhere I’ve rented will give you the paint they use so you can repaint before you leave you just have to ask them for it,” another commenter wrote.

“The only reason we got the deposit back on our last apartment is because we became friends with the person in charge of finances,” a commenter wrote.

The Daily Dot has reached out to @kay.1331 via a comment on the video as they could not be identified on other social media platforms.