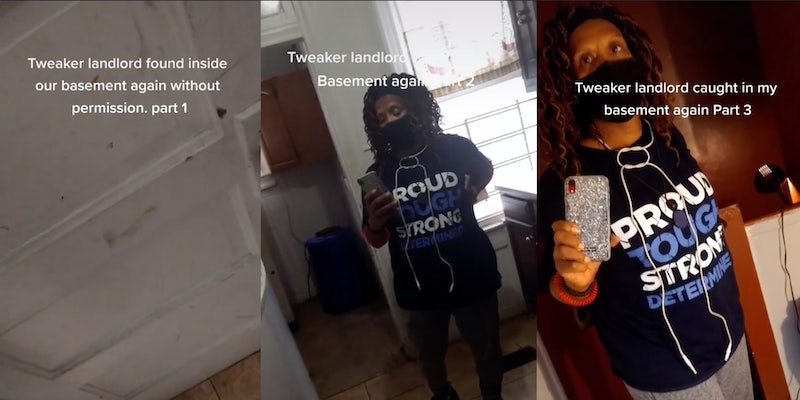 ‘Don’t come into our house without letting us know’: TikToker captures landlord allegedly trying to get into home through basement (updated)

'This is starting to be a f*ckin' hostile environment for me.'

A TikToker captured footage of his landlord allegedly breaking into his home through the basement.

The drama unfolds over a series of videos shared by user @noooobmaster.69, whose real name appears to be Christian Rodriguez based on the landlord’s repeated use of the name. Part one of the viral series begins with the sound of someone vigorously trying to open a locked door, before failing and resorting to pounding on it instead. Rodriguez approaches the door but does not open it, instead asking through the barrier if “we can help you.”

The landlord immediately demands that Rodriguez “unlock my door.” When Rodriguez asks why the landlord is inside the occupied home’s basement, the apparent landlord feigns confusion before again demanding to be let in. She seems affronted by Rodriguez’s tone.

Rodriguez doesn’t back down, ignoring the landlord’s repeated demands to open the door and responding with questions about why, exactly, the landlord is in his basement. When Rodriguez asks why she is “in my house,” the landlord responds that “this is my house.”

After a brief exchange, Rodriguez clearly tells his landlord “don’t come into our house without letting us know,” before adding that “we’ve already told you this many times.” The landlord ignores him, instead choosing to call the police over his refusal to grant her entry. The first part of the video series ends there. The text overlay for all three videos indicates that this is not the first time this has happened, as it notes that the home’s “tweaker landlord” was “found inside our basement again without permission.”

In part two, Rodriguez caves and unlocks the basement door. Through the wood, the landlord—whose name appears to be Robin—can be heard on the phone with police. Her exact words are difficult to make out, but Rodriguez claims she told police that he was “threatening” her. Robin remains on the phone for the first portion of part two, while Rodriguez repeatedly asks why she is in an occupied rental. She claims that he locked her in the basement, but Rodriguez notes that there is an exit to the exterior of the house from the basement.

After saying that it is unacceptable for Robin to be in his home without permission or notice, she seems to allege that she notified one of his roommates that she would be coming by. Rodriguez immediately attempts to confirm this, running up the stairs to ask his roommates if “anybody” knew “Robin was going to be here?”

There appear to be four roommates in total. Rodriguez and two others are currently home, and Rodriguez notes that the fourth is at work. Both men currently in the residence appear to confirm that they were unaware of Robin’s intent to be at the home, though the landlord notes that she signed a lease agreement with one of the men earlier that day.

One of the roommates notes that “this is starting to be a fuckin’ hostile environment for me,” before saying that “that’s a lease breaker.” All three men note that they “didn’t sign up for this shit.” One of the men puts the time at nearly 7pm. The conversation gets a bit chaotic between the four people, but, as he follows her back down the stairs, Rodriguez tells his roommates that he is tired of Robin “acting like she’s the warden” of a prison.

“Like, we’re her fucking slaves, and she can do whatever she wants. We all have rights,” he says. The series of videos concludes there.

Rodriguez said in the comments section of his video that police eventually arrived at the home. According to his comments, police “made her leave with no consequence” when they arrived, but Rodriguez said he is now facing legal issues due to Robin’s alleged claims that he “threatened her.” In another comment, he alleged that he was served with a restraining order after Robin allegedly claimed he “threatened her life” and allegedly accused him of being “suicidal/homicidal.”

According to Rodriguez, he has “court tomorrow to prove her wrong.” The videos were posted four days ago, as of this article’s composition, which should mean that Rodriguez has already been to court over the incident. No new public updates have been provided by Rodriguez.

Commenters were quick to side with Rodriguez and his roommates, calling the landlord’s actions “sketchy” and “scary.”

A few people shared alternative explanations for the landlord’s presence in the home, but most believed Rodriguez’s claims that she showed up unannounced and without permission. In response to commenters accusing Rodriguez of not paying his rent, he claimed that he and his roommates are completely up-to-date on their expenses, additionally alleging that Robin owes him “3 thousand in unpaid work” at her other owned properties.

Rodriguez said he is now pursing charges against Robin for filing a false claim against him. He said that he and one of his roommates are already looking for a new place to live. He said that the house is located in Baltimore, but he is new to the area so is unfamiliar with specific neighborhoods.

Update 12:40pm CT Sept. 17: When reached for comment, Rodriguez told the Daily Dot he deleted two of the videos because he is waiting to speak with a lawyer. He says the woman pressed charges against him, and he’s fighting back “with these videos to prove she is lying.” He says a judge will see his “evidence” on Oct. 15.

“I’m charged with wrongful imprisonment even tho she came into the house from the basement exit and threatening her life which in the video I never did. I was arrested last week after the restraining order she filed. but let go on my own recon to fight all this,” he added.