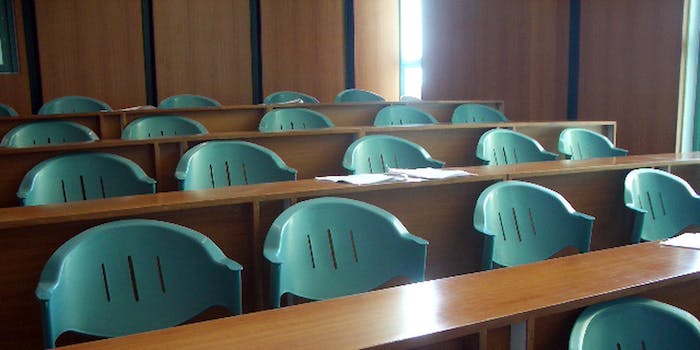 Is Kevin DuJan concerned about the children, or is he settling a personal score? It's difficult to say for sure.

Throughout his 3,000-word, borderline insane rant, DuJan chides Balof for flaunting his sexuality in public, while still daring to be around children. Trying to make a difference in the lives of young people? The nerve. DuJan writes:

“Chicago Public School system currently employs a man who continues to moonlight in the adult entertainment industry; by day, he’s charged with taking care of classrooms full of mostly minority children … but at night he bares his body in sweaty bars and upon public stages for the hungry eyes of other gay men.”

As “Bradley Thomas,” Balof is a mainstay on Chicago’s queer comedy scene, where he frequently performs his stand-up act. In his routine, Balof does a spot-on Liza Minnelli impression, the gay community’s favorite second-generation icon. He’s appeared at such venues at Zanies, a local comedy bar, and Sidetrack, a wildly popular club that’s a fixture of the Boystown district.

This is where things get interesting. DuJan has had run-ins with Sidetrack in the past and claims to have been refused entry into the club because of his status as a “known conservative Christian.” Sidetrack denies this.

In response, DuJan has been critical of the establishment and others like it, calling them an engine of the “Gaystapo.” As a conservative Christian, DuJan believes that institutions like Sidetrack target gay Christians in the community and calls the city’s Gaystapo the “goon squads for the [political] Left.”

The vendetta against Sidetrack became personal earlier this year when former Sidetrack employee Joseph Parker sued the bar for “sexual and religious harassment.” In addition to a bevy of other claims, Parker alleges that his co-workers evangelized that he “abandon any pretense of holding conservative or Christian beliefs.”

In response to Parker’s accusations, Sidetrack’s laywer, Scott Gilbert, cited the bar’s commitment to its patrons and employees.

“Sidetrack has a long and proud history of speaking to equality in Illinois,” Mr. Gilbert told DNAInfo. “It remains proud of the inclusive, welcoming atmosphere for which it has been known for in the community.”

Sidetrack’s attorney believes that DuJan is behind the allegations. As admitted by Joseph Parker’s lawyer, DuJan just so happens to be in a relationship with Parker—you know, the guy suing the place that Balof performs at. It’s a tangled web Kevin DuJan weaves.

DuJan’s essay on Bradley Balof makes it clear that his criticism of Balof is spurred by personal issues rather than a genuine concern about Balof’s creative work, which is arguably none of his business. DuJan also calls out Balof for his criticisms of Chick-fil-A, the religiously conservative company that came under fire last year for its CEO’s stance on gay marriage. What does Bradley Balof’s hatred of bigoted chicken have to do with his ability to teach? You tell me.

Months later, Boston’s Mystic Valley Charter School decided not to renew Kevin Hogan’s teaching contract because of his work in the industry, and all references to his name and person were quickly removed from the school’s website. Hogan had been working as a teacher in Massachusetts for 20 years.

Jezebel pointed out that there’s something to be said for the former argument, as “even a barely-exposed bra strap can lead to months of taunting” and Halas could be a target of harassment in the classroom. However, that’s not what the judges seem to be saying. It’s not about harassment; it’s that her history makes her unworthy of respect—from students or faculty.

Both Cabos-Owen and DuJan seem to believe in abstinence-only education; we simply can’t allow sex around our children, whether that’s Sasha Grey promoting literacy or Bradley Balof leading his students in a discussion of Where The Red Fern Grows.

However, Balof doesn’t feel that his performance work interferes with his ability to educate. In fact, he argues that it makes him more effective. As he told The Qu’s Tony Soto:

“I approach it as this is something that I do and that everyone should follow their passion in life. To be a role model and to be in front of students … to not also want to express this artistic side of myself and to entertain people which is just something that is innate to the core of my being would be to not practice what I am preaching.”

In The Qu interview (quoted in DuJan’s essay, but now no longer available on YouTube), Balof says that students have discovered his work before and approached him about it. They don’t seem to care, as long as Mr. Balof shows up every day to teach—which won’t be for much longer. Chicago Public Schools recently announced the closure of 50 elementary schools, of which Stockton Elementary is one. Bradley Balof’s nightlife is the least of anyone’s problems.

Note: The school’s principal, Jill Bensenjak, could not comment on the story, as Balof is under investigation, but she stated that Balof is a “wonderful teacher” who has her “full support.”